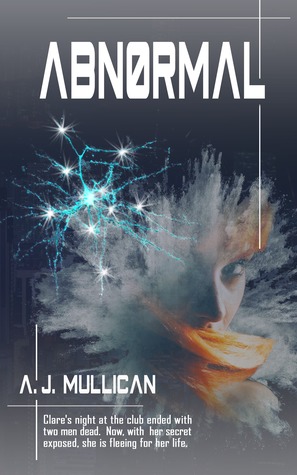 Dear readers, tonight with me is a genetically-gifted young woman. Unfortunately, her socio-economic background is from lower echelons, marking her as an “abnormal”. She is here to tell us about her world, and about her dangerous struggle for survival against the “Gifted”.

I grew up in a poor borough of Heaven’s Light called Undertown. Most of the buildings are older, brick-and-concrete construction, but the roadways are the same electrostatic roads as Uptown Heaven’s Light and other major cities. I went to a public school, but I stayed in the back of the class and tried to keep my head down. The Squads patrol Undertown pretty regularly, so I had to keep a low profile to keep myself out of a camp.

My favorite toy wasn’t really a “toy”—it was my own mind. I remember how Mom would sit down with me and teach me to use my telepathy to search for Squads, to read the minds of the neighbors, to manipulate thoughts. She made a game of it, and her mind was bright and golden and full of love. I really miss her…

I’m kind of…between jobs. I have a “job” of sorts, but it’s not one I chose, believe me. I’ll get out of it…one of these days.

I got into a shitton of trouble a while back at a local Undertown club. Two Council Members’ sons had been stalking me, and they caught up to me and attacked me. That was a huge mess! I nearly died—if it wasn’t for Eli coming along when he did, I would have. Then I ended up on the run with Eli, discovering a whole world of Abnormals that I didn’t even know existed, and dodging Squads everywhere I went.

What did you first think when they grabbed you?

I thought I was dead for sure! I’m pretty tiny, and as fast as they dropped my Athlete bodyguard there was no way I could fight them both off by myself. Thomas hit my head pretty hard, and I couldn’t think straight to fend off Matthew’s mental attack. Their minds were so twisted and malicious…it makes me shudder to think what might have happened to me if they’d, well…If they’d gotten what they came for.

The assault was pretty scary. So much blood loss, and the head injury on top of it, make it all hazy. Not quite hazy enough, though—My Telepath memory brings it back to me in the middle of the night. I still have nightmares to this day.

What is the worst thing about being Abnormal in your society?

It sucks balls. There’s no real difference between us and the Gifted aside from how many Bank credits our parents have, but since the “ruling class” wants to keep ruling, they keep outlawing “Abnormalities.” My mom had to spend her last credit to get my Certificate of Purebirth and my NormID, and the private doctor who signed off on the documents wasn’t cheap, either. You see, the Council has mandated that any Abnormalities found at a prebirth genescan must be terminated. If the lower class doesn’t have any Gifted kids to raise up and rise up, then the Council stays on top. It’s bullshit. We should have just as many rights as those rich fuckers. How did the rich get in charge in the first place, anyway?

Believe it or not, the noise of other minds inside mine is beautiful. It’s all overlapping and chaotic, but without the mental static of nearby people I feel lost and alone. I love having other thoughts inside my head. I guess it’s like the white noise generators they have in some public places to keep people relaxed. It’s something that’s always been there, wrapping around my brain like a warm blanket on a cold winter’s night.

I didn’t really have friends before I met Eli. Friends might find out I’m Abnormal, and then it’s off to a camp. Besides, what did I need friends for? I could make people do what I wanted, as long as they didn’t have a PsyBlock. I was kind of a street rat, fixated more on getting high and getting laid than getting along with people.

Eli—God, where do I start? He saved my life in that alley, and he put his life on the line and then some, just for some random girl he bumped into outside of the Kat’s Meow. He’s tall and stacked and smart and gorgeous and more than a little infuriating at times. Then there’s Harper. God, she’s so hot, but she’s also funny and kind and brave. They’re two of the only good things to come out of this whole mess.

The Council’s a bunch of stuck-up bastards, and Ezekiel Howard’s the worst of them. He raised Matthew, one of my attackers, and that guy was seriously fucked up. If you could see what was inside his mind…so thick with evil and malice…It makes me want to throw up just thinking about him.

Before the incident (where I was forced to grow up a little), I’d spend my time drinking and getting high. I was not a model citizen by any means. Number Nine was my favorite pastime (before Eli and Harper—I don’t need Number Nine with them haha), but now I like real coffee—real coffee, with the dried beans all ground up and brewed. I like cuddling with Eli and Harper and just reveling in the feel of their thoughts inside my head.

I’d…rather not talk about the future. It’s all a bit too uncertain right now.

My stepdad—When he killed Mom, when he beat her to death, I… It wasn’t a Squad pulse pistol that killed him. The Squad Snipers missed when they fired on him in that alley where they cornered him. I know, I know, Snipers never miss—that’s what they say. But if the Snipers’ minds are a little scrambled, if their arms move a hair’s breadth to the side…

Let’s just say he got what he deserved, and I got closure.

Raised in Alabama, AJ lives on four acres in southern Arizona with her husband and her Maine Coon mixes, Rory and River. Though she works in a busy medical office, she finds time in the predawn hours to write and craft. Rory and River help with that; if her insomnia doesn’t have her up dark and early, they will.

AJ is active in medieval reenactment and is just as comfortable with a rapier in hand as she is with a pen. She also enjoys costuming and makes all her own historical garb and cosplay costumes. AJ likes to spend quiet nights at home when she can steal them, but she can often be found camping with chosen family or going to reenactment events or pop culture conventions.

You can find Clare on the pages of Abnormal.

Join us next week to hear from a fierce warrior, specialist in fire-magick. Please follow the site by email (bottom-right) to be notified when the next interview is posted.

One thought on “Clare Rhoades (of Abnormal, by AJ Mullican)”