Garfield Feldman (of Wolves In The Desert, by Timothy Bateson) 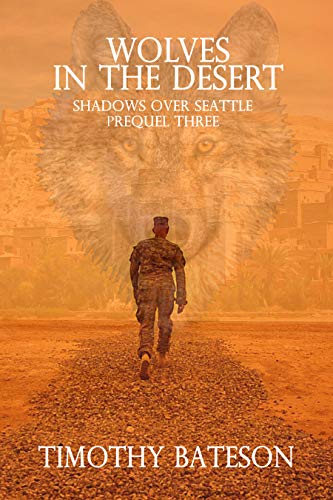 Dear readers, tonight we have a mid-week special column, to celebrate the Friday release of the next volume in the Shadows Over Seattle series.

With me is a Gunnery Sergeant from the US Marine Corps — the second character we interview from the series (the first was a lupine – a lycanthrope – which you can meet here).

He is here to tell us about his latest snatch-and-grab mission deep in enemy-held territory — and the surprising things he ran into during it.

I don’t really have many clear memories of the places I grew up in, because we moved around a lot.

My father was deployed all over the states, and sometimes even abroad. That meant relocating everytime he got new orders, and I’ll be honest, I hated it. But he carried so much pride in serving his country that I never questioned why he kept reenlisting at the end of each tour of duty.

The bases all looked alike to me as a kid, with only minor changes, but the stories my father told changed everything. He’d tell me about foreign places and the cultures of their people. Unfortunately there were so many stories he couldn’t tell, because he said there were secrets that should never be told.

Because I grew up around soldiers, there were guns around the house, and I begged for one of my own for months. I wanted to be like them so badly, and I’d use sticks in my games when I’d pretend to be one of them.

Sometimes my father would join me in these games, and he finally started to teach me how to handle real guns. He told my mom it was for my safety, and so that I’d learn to respect the danger they represented. Honestly though, I have a feeling he secretly hoped that I’d lose the taste for it after a while.

I signed up for the Marines Officer Candidate School as soon as I was old enough to do so. It drove my mom crazy for weeks worrying about what would happen to me when I shipped out to Parris Island. She didn’t think I had the strength and willpower to get through boot camp, because I dropped out of college to enlist.

Thankfully, I got through with my brains intact, and a thirst to serve. I finally understood what had driven my father to keep reenlisting.

I’ve been in for just over ten years now, and the tensions in the middle-east have taken us to the edge of another world war.

My platoon was recently deployed to Iraq, and we’ve undertaken a number of patrol missions. We recently started training for a snatch-and-grab mission. But  I can’t say where we’re going, or who we’re after, because the mission is classified.

What I can tell you is that there have been some very disturbing reports coming back from some of the recent missions. Fireteams have been ambushed from buildings they’d marked as cleared, and the Fedayeen Saddam have started using dogs and children to carry explosives.

What did you first think when you arrived in Iraq?

Honestly? I’d lived in Texas for a while, but when they dropped the ramp on the transport hatch, I thought I’d signed up for a tour in Hell itself. The heat hit me almost instantly, and I found myself hoping that the barracks had AC installed.

What’s the scariest about your deployment to Iraq?

Not knowing friend from foe among the locals. We’re here to do a job, but our presence isn’t popular and there are people housing enemy forces, or working with them. You never know where the bullets could be coming from, or which roads have buried IUDs.

What is the worst thing about life on base?

Having to deal with those damn Einsteins over in Intel. The brass may claim those kids are the brains behind most of the information coming in from recon, but I’ve seen too many ops go sideways to believe it.

It’s me and my squad that are putting our lives on the line out there, but that’s what we signed up for. So we follow orders and pray that things don’t end up fubared.

Getting to hit the rack after having to wake up for an o-dark thirty watch rotation. Sure it’s possible I’ll only get a half hour of sleep before someone calls muster, but I’ll take that rest where I can. It almost beats cracking open a few cans with the squad on liberty.

Seriously? You want me to spill the beans? Okay, I’ll tell you about my fire-team. Best damn devil dogs in this godforsaken sandbox. We often let off steam together while on liberty, or hit the beer garden at the end of a particularly grueling op.

Saki’s our straight-man, and one hell of a scrapper, and I can’t think of a single time I’ve seen that mug of his crack a smile. Walters is the class clown, but he’s got a hell of a way with people and adds levity to briefings at just the right time. Bonander’s our fresh meat, straight out of boot but one hell of a radio operator. Willenborg is an ice queen, but one of the best snipers I know. She and Bonander make a great team, but I suspect there’s more to it than him being the only one she trusts to be her spotter.

I’m dedicated to the Corps, so no. I’m keeping myself from getting attached, unlike certain members of my team. I can’t afford the distraction. We’ll see what happens if, and when, I get back to the real world.

I’ve come to learn about the Fedayeen Saddam forces, in a very short period of time. They’re crafty with their placement of explosives near roadsides, or in the path of convoys. But what I hate most is the fact that they seem willing to sacrifice animals, women, and even children for a chance to wipe out our troops.

I guess I just don’t understand the level of evil that goes into strapping a bomb onto a child, or handing them a gun and telling them to kill people.

For drinks, it’s whatever’s being passed around. I’m really not particular. I’ll take beer, whiskey, or even tea if it’s offered. Obviously, if I’m on duty, there’d better be no alcohol, or someone’s going to be hearing about it.

As for relaxing, well, that’s simple. A good fifteen, twenty mile hike, with full pack. There’s nothing like getting out and putting one foot in front of the other, and being able to disconnect the brain from anything other than reaching your goal.

Eventually, I plan to retire from the Marines, but only when they won’t let me re-up any more. More likely though, I’ll be transferred to Camp Living Room because a mission turns into a cluster… and… well, the kind of injuries I’ve seen don’t bear thinking about.

When it comes to combat, I’m afraid. All. The. Time. I’d like to say I wasn’t, and that my training made me strong. But no sane man goes into combat without at least a little fear in his heart.  The day I lose that fear is the day they fit me for a casket and ship me home for the last time.

Timothy Bateson has been self-publishing his stories since 2016, following several anthology appearances. He enjoys developing the “Shadows Over Seattle” Urban Fantasy stories alongside his wife, Sandi, who he credits for the inspiration for some of his favorite characters.

Bateson is also a book blogger, who loves to feature fellow indie authors, a member of numerous online writers groups, and the Fantasy genre coordinator for the annual Brain to Books Cyber Convention & Book Expo. When not involved in writing, or promoting others, Bateson can be found Bullet Journaling his way through life, and waiting for his next falconry session.

You can find Garfield on the pages of Wolves In The Desert: Shadows Over Seattle.

Join us next week to meet a genetically-gifted young woman, from the wrong end of town. Please follow the site by email (bottom-right) to be notified when the next interview is posted.