Barbara Bernsen (of the St. Rage series, by Karen Eisenbrey)

Dear readers, tonight with us is your not-so-typical high-school junior girl. While invisible since third grade, a magic hat recently brought her back to light. She’s here to talk about her priorities: an all-girl garage band, and fighting bullies with miraculous super-powers.

I was born and raised in Seattle, WA, which maybe explains all the flannel in my wardrobe. Practical three seasons of the year; some years, four. You’ve probably heard that it rains a lot? Yeah, so good boots are also a must. I got these retro Doc Martens at the thrift store for only $10! Anyway—we’re lucky to have a lively music scene. All-ages shows are a little harder to come by than over-21, but my dad was great about finding shows and festivals he could take me to once he realized we liked a lot of the same bands. We saw the Sonics!!! After I was in high school, I insisted on going by myself, hoping to meet my people. I had this fantasy that I’d be at a show and I’d overhear some other kids talking about starting a band. I’d say, “I’ve been writing songs,” and they’d be like, “Cool, you wanna be in our band, too?” and I could be a backup singer. But I was still invisible then, so that didn’t work out so well. I’d go, enjoy the music, and never talk to anybody but the door guy.

When I was 6, I got a toy electronic keyboard for Christmas. I had just started piano lessons and it was fun to plunk out the tunes I was learning with sound effects and drumbeats! And it had a microphone, too, so I could make little recordings! My parents are both music lovers but not musicians beyond singing in church. And I never really learned to play the piano, but I think they could see music was important to me from an early age. I still use that toy keyboard when I’m writing songs now, if you can believe it. It lives on the shelf above my desk, next to my snowglobes and bobbleheads.

I’m a student. When all this started, I was still in high school. Now I’m going to community college. One quarter down! I’ll probably get some kind of nothing job next summer. Oh, what do I mean by “all this”? Well, the band was obviously a big part of my life the last years of high school. I write songs for and sing lead in St. Rage. We’re kind of on hiatus while everybody goes to college, but we’re not done. And then there’s the whole superpowers thing. Against all logic, I’m leading a superteam called The Rage Brigade. I did not see that coming.

I was invisible—maybe literally—till age 16, when the most popular guy in school put a magic hat on my head and suddenly, I could be seen! That gave me absurd confidence, enough to start an all-girl garage band. The anger-fueled gestural superpowers were … unexpected. I try to use them for good; careless drivers, bullies, and misogynist jerks better watch out!

Then I started finding other young people with unusual abilities: a kid who punches internet trolls right there in the comments; a girl who can text her past self to undo mistakes; a guy who talks to bugs, and another who hears the soundtrack. We became the Rage Brigade. When we realized a fake pastor was using mind control on an entire megachurch, it was up to us to stop him.

Dear readers, tonight in an interesting twist we have both a character — and his author! He’s a lawyer assisting the protagonist, and has his own style of doing things.

Debbie Burke: Tillman Rosenbaum is the brilliant, arrogant, cynical attorney who elbowed his way into
the first book in the Tawny Lindholm Thriller series and refused to leave. Today, I’m interviewing Tillman for The Protagonist Speaks. Thank you for talking with me, Tillman.

Tillman Rosenbaum drinks Glenfiddich single malt scotch while his intense dark eyes pin.me to my barstool. His baritone sounds like God in a cave.

TR: Get this straight right up front—I didn’t agree to this interview. Tawny did.

DB: Uh, okay. Since Tawny is one of the innocents you saved, why don’t you tell us how
you first met?

TR: Tawny had unwittingly gotten involved with a terrorist (Book 1 – Instrument of the
Devil). Feds were after her, seized her bank account. She was in deep shit and her only crime
was trusting the wrong guy. I like a righteous cause.

TR: I’m the asshole who backed down Goliath. Afterwards, I offered her a job. She was
broke from her late husband’s medical bills, doesn’t have much education, dyslexic—helluva
time reading, can’t spell. But she’s really bright and has this gift. People open up to her. Clients
tell her the secrets they’re afraid to tell me.

DB: You’re six-seven, aggressive, and sarcastic. Can’t imagine why clients would be scared
of you.

TR (snorts): I scare prosecutors and judges, too. Underneath this gruff exterior beats a heart
of stone. In more than twenty years of practice, I only lost three cases.

DB: Your style of questioning differs from Tawny’s.

TR: Hell yes. I jump on ’em with both feet. She just smiles, like the sun breaking through
clouds, and then she listens. Finds out the damnedest shit that way. (shakes his head in
amazement)

DB: So your skills complement each other?

TR: Oh yeah. Like when my old man was targeted by this sexy con artist (Book 2 -Stalking
Midas). He’s a smart financier, made millions, but an unprincipled prick. Serial womanizer.
Drove my mother to suicide. Suddenly he’s broke. Refuses to talk to me. But damned if Tawny
doesn’t get him to open up. She cracked the scam. Unfortunately, the con artist almost killed her
in the process. (looks away, blinks hard, and swallows) 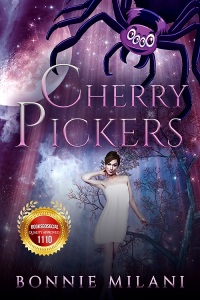 Dear readers, with me tonight is a young woman from the planet Sisyphus. As you may recall, Sisyphus is a particularly inhospitable world, and is home to a woman-only penal colony.

At seventeen years of age Nikki is obsessed about getting her gun to impress her mother, the director of the penal colony. For this she needs to be an adult, which – in her opinion – requires losing her virginity. The only way to do this is to lure and kidnap a man from a passing space ship, to ‘pick her cherry’, as it were.

She is here to tell us of her adventures, together with her adopted native brother.

Tell us about how you grew up.

If you ask Mah – that’s my mom – she’ll tell you I’m still not grown up.  And I’m seventeen already!  I mean, I earned my gun!  Hard way, too, not like some other girls I could name.

Okay, but do tell us a little about where you grew up. What was it like in the colony?

You mean SisPenOne?  It’s a penal colony.  Same as every other penal colony in the Commonwealth, I guess.  Well, except it’s all women.  And Mah says Sisyphus got its name ‘cause the whole planet really is out to get you.  But never bothered me… well, ‘cept for that time the toilet vacuum failed and a nosher got through and nipped out a chunk’a my butt.  Got a really great scar from it.  Wanna see?  (She turns, loosening her pants)

No, no, that’s all right, we’ll take your word for it. Did you have any favourite toys as a child? Any cherished memories?

Toys?  Oh, those fakey things you give little kids.  Dolls and stuff, yeah?  Saw some of those things in those social studies vids Mah made Sam and me study.  Never needed any myself.  Sam and me – END_OF_DOCUMENT_TOKEN_TO_BE_REPLACED

Thea (of Mistress of Rome by Kate Quinn)

Dear readers, tonight with me is a woman who came to us as a Judaean slave girl, only to catch the eye of our divine emperor. she is here to tell us of her remarkable journey, and about the highest echelons of Roman society.

What were your first impressions of Rome, after being sold to slavery in Judea?

I survived the suicide massacre of Masada when I was about four years old; one of seven survivors. The rest of my family died, and then I was enslaved and brought west. I don’t remember much of Judaea, but even so, Rome has never felt like home to me. It’s hot, teeming, raucous, and quite frequently cruel.

Is Emperor Domitian as bad in person as the senate makes him out to be?

It depends which side of him you see, and he has as many sides as a set of dice. To his soldiers he is blunt, honest, brave–they worship him. To the Senate he is arrogant, overbearing, dismissive–they despise him. To his family is he capricious, fearful, fickle–they quiver before him. To me . . . well. I fascinate him because he doesn’t frighten me. He likes to test that, and it’s kept me alive so far. END_OF_DOCUMENT_TOKEN_TO_BE_REPLACED

Dear readers, relationships have always been complicated. Tonight on the guest couch with me is a young woman, trying to navigate the complexities of relationships in the age of sex, drugs and rock’n’roll.

Tell us about where you grew up. Did you have a favourite toy or memory?

I grew up in a middle class suburb of Boston, Weymouth, Massachusetts. Since I was born in 1951, it was pretty much like you saw on Ozzie & Harriet, in other words, dull, boring; the kind of place where all the neighbors would stop to make their purchase whenever one of the kids on the street set up a Lemonade Stand. My parents also had a hunting and fishing lodge in northern New England that was pretty cool. You can read more about it in The BackStory. It’s FREE at www.jolenecazzola.com.

I didn’t really have a favorite toy – I played with my animals, mostly cats, a German Shepard named Satchamo, a couple rabbits and some baby chickens I hatched for a school project. Eventually my parents talked me into letting a local farmer take the rabbits and chickens so they would have more room to roam around. He promised he wouldn’t eat them! And I grew worms to sell to the fishermen – do they count as pets? END_OF_DOCUMENT_TOKEN_TO_BE_REPLACED