Dear readers, 1800 years after Julius Caesar survived the assassination attempt, the Roman empire sits at the forefront of technological and industrial innovations.

We have made our way to the edge of a forest, where the men of the XIII Germania legion prepare for battle. We are going to interview one of the young officers of the legion, on the cracking facade, espionage, corruption, and revolution that are pulling the empire apart.

Can I help you? You must be one of our new recruits.

Yes, named after both the great founders of the Empire. My father was a traditionalist, what can I say.

And you’re actually from Brittenburg? I thought everyone there was dead!

Ha! Not a chance. It already felt like a swamp mixed with a giant factory. At least, the part where I lived. Don’t get me wrong, the palaces and marketplaces in Brittenburg are…were…will be beautiful again.  At least, once reconstruction has completed. Nortlander raids and destroyed seagates tend to ruin things, especially when your city is below sea level. That’s what we get for living in Germania Inferior.

You’ve never heard of it? Uh… It’s opposite Britannia and north of Gaul? The Belgicae used to live there… Anyways, long story short – big city next to the ocean, but big walls to keep out the ocean. Didn’t you study geography in the scholarum? END_OF_DOCUMENT_TOKEN_TO_BE_REPLACED

George Washington (of A Time of Need, by Brent A. Harris)

Dear readers, tonight with me is a fighting for king and country.

In an alternative time-line to ours, Colonel George Washington fights on the side of the Crown, against upstarts such as Benedict Arnold, who seek to seize power and lead the colonies on a rebellious path.

The interview is conducted by a reporter native to his own time-line, and reprinted here. Read on to hear about the struggles of war, about torn loyalties, and painful decisions.

[Washington doesn’t smile. He nods, but seems agitated, perhaps he feels an urgent need to return to his ranks. Maybe he’s nervous about something else. Something I might uncover.]

Thank you, Colonel. Could you tell us about yourself? You were born here in the colonies, weren’t you? Virginia, was it?

Indeed. I own large tracts of land in Virginia and an estate off the Potomac — Mt. Vernon. I’d rather not say where precisely. You understand? My home is my life, my connection to this land. Just as the King safeguards his Colonies, I wish to safeguard my home and the people there under my care, with particular attention to my wife, Martha. END_OF_DOCUMENT_TOKEN_TO_BE_REPLACED

Victoria of Ourtown, aka Vic the Blade (of A Wizard’s Forge, by A.M. Justice) 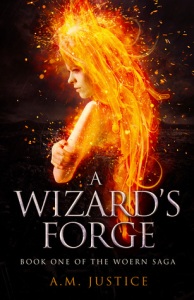 Dear readers, tonight we are republishing an article from the premiere newspaper in Latha, on the fantasy planet Knownearth.

The newspaper has followed this up with an interview with Vic, to hear her side of the story. We publish this second interview in full. Read on to learn of Vic’s adventures, and what drove her from being a shy scholar to become a warrior and pick up the fight against Relm.

Last week, this paper published the news that Captain Victoria of Ourtown—aka Vic the Blade—had tried and failed to assassinate Lornk Korng, the Lord of Relm. The Monarchy and Prime Minister’s office have protested that the Heralds’ coverage of the incident was biased. As members of the Lathan free press, we stand by our story, but invited the Blade to tell her side. Much to our surprise, she granted an interview, published here in full.

Let’s start with some background. You grew up on the northern steppes. What was it like there?

It was nothing at all like Latha. Before I arrived here, I’d never seen a tree, much less a forest as big and dense as the Kiareinoll. The steppes could be beautiful, especially in spring when the snow shrank into the ground and the sun bathed the purple hills in golden light. But it was bleeding cold all the time, and in winter we had no more than an hour of sunlight a day. And the wind was endless. You’d think I’d have felt claustrophobic in the Kiareinoll, but somehow I’ve always felt more at home surrounded by trees than I ever did on the steppes.

What sort of things did you do as a child? Any special toys or games?

These aren’t the sort of questions I expected. You really want to know about my childhood? END_OF_DOCUMENT_TOKEN_TO_BE_REPLACED

Dear readers, tonight with me is a man born in space, and one of the first colonisers of an alien world.

He’s here to tell us about ancient conspiracies, about stone-age and space age, about archaeology and cryptozoology.

My family was from Earth. My great grandpa Rob ran a conspiracy theory blog, it’s still archived at http://www.larc-scifi.com/LettersAboutRealConspiracies.html. The family lived in New England right up until the League of Atlantis Reborn Colonies launched its first colonial starship, the LARC1. I was born in space on the way to the planet Nibiru. I still live in the old colony now that it’s grounded on the planet.

I had a set of little plastic Colonial Security Force figures. My mom even made me a CSF costume for Halloween. I wore it until it fell apart! It’s no wonder I grew up to join the force.