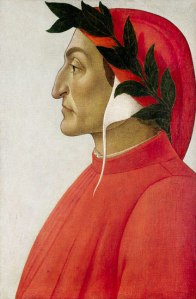 Dear readers, tonight we have a special treat – Dante Alighieri, who appears as a character in his own novel Inferno, the first part of The Divine Comedy.

Dante, I understand you journeyed through Hell for your most popular book, Inferno. Could you give a brief overview of your journey for us?

Of course! I started my journey on the night of Good Friday in the year of our Lord 1300. I was 35 years old at the time.

I found myself lost in the woods and the shade of Virgil visited me, and said that I could find Paradise, but I would have to go through Hell to get there.

For you modern folk, please note that at the time we called spirits shades, i.e. shadows of what they once were when they were alive.

Regardless, I accepted Virgil’s suggestion, and what follows became Inferno.

What was Hell like? Could you describe it briefly?

Well there were Nine Circles of Hell, ten if you count the vestibule at the beginning. That vestibule housed the uncommitted souls who were destined to run around endlessly, holding a blank banner.

After the vestibule, the first circle was Limbo, and after that Hell really began. It got worse as you went down, and the sins got worse too. Not a pretty place!

What was the most surprising thing about Hell?

It’s not always hot like we think it to be. There are hot areas, that’s for sure, but it’s not all fire and brimstone.

The third circle held the gluttons and it was filled with cold, cursed, dark rain. The last circle held Satan himself, and it was freezing. The devil was half-frozen in ice, and his flapping wings really gave it all a chill.

Were there any good parts to this place?

Well there weren’t any good parts per se, after all it is the underworld. But there were a few parts that held some glory. Limbo itself held philosophers, virtuous souls like Homer, Ovid, Horace and Lucan. They were my heroes growing up, and they were sent here because they lived in a time before salvation was possible.

But the beautiful thing about Limbo was the light. Limbo held no naturally occurring light mind you, and yet the place around these shades were well-illuminated. Why? It was the light of their reason. It sounds a little metaphorical I know, but it goes to show you – whenever you follow the laws of reason there is always light, even when you’re right next door to Hell.

Why do people end up in Hell?

I don’t deign to say that for sure, but I was surprised to see that their place in Hell was influenced by the standards of the time. I found Cleopatra, Dido and Helen in the second circle of Hell, which was reserved for adulterers.

If you recall, Cleopatra committed suicide, which was a mortal sin in my time. But it wasn’t a sin in her time, so she was only punished for her adultery and sent to the circle of lust right outside of Limbo.

Any lessons you can share in regards to the modern times?

Well, in my time my native Florence was split between two factions, the Guelphs, who advocated a separation of secular politics and the papacy, and the Ghibellines, who thought the pope should be ruler of all.

I was a Guelph, and before I entered Hell I participated in my fair share of skirmishes between the two sides. In the third circle I met a glutton named Ciacco who had taken the form of a pig. He warned me that my Florence was going to end up in bloodshed if we weren’t careful. A denizen of Hell warning against bloodshed on earth!

I guess what I took from that is that though it might be in humanity’s nature to split into factions and conclude your arguments with violence, it’s up to the individual to stop that type of behavior. Your own city might be torn into two, but if you choose to be kind, you might push the encroachment of Hell away for just a little bit longer.

Jonathan Maas is a writer living in Southern California. He has three novels up on Amazon, and is a big fan of Dante and too many other authors to mention here.

Next we will get to interview the other side – an angel that witnessed the start, and end, of creation. Please follow the site by email (bottom-right), via Twitter or like our Facebook page to be notified when the next interview is posted.

One thought on “Dante (of Inferno – fanfic by Jon Maas)”