Livio Marchiori (of EVO, by Diane May) 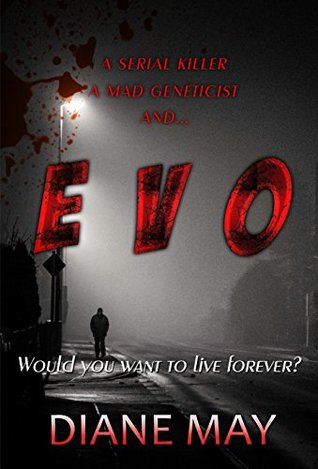 Dear readers, tonight with me is homicide detective Livio Marchiori from Verona, Italy, who is currently working on a case which threw the beautiful city of Romeo and Juliet into panic. Captain Marchiori is one of the best detectives in town, his rate of solved cases being the highest in Northern Italy. He is now facing The Hypnotist, a serial killer whose modus operandi borders the supernatural and who is as elusive as a ghost, and is here to tell us a little bit about himself and his investigation.

I grew up in Sicily and if there’s one thing you should know about growing up there is that Sicilian mothers are like fire-spitting dragons.

What do you mean?

Let me give you a few examples so you understand:

If she tells you “dinner’s ready” your ass better be at the table the very next second or you’ll be sorry (which means she’ll use her most cherished weapon, the wooden spoon, to make sure you won’t be able to sit on your ass for a few days).

You can’t walk barefoot around the house because you’ll get sick and die (must be some fatal disease known only to Sicilian mothers, because the rest of the world, or even Italy for that matter, don’t seem to have a problem with that).

And last but not least, if you’re a man and have a Sicilian mother: no woman, no matter who she is, no matter how beautiful and kind and smart she is, will ever be good enough for you. Forget it.

And another thing you should know about Sicily is that the best cannolis in the world are made there. Period.

There’s a serial killer loose on the streets of Verona. What can you tell me about the case?

It’s an ongoing investigation, so not much. What do you want to know?

What is the killer’s MO?

We don’t know yet, but the victims look like they had been dipped in boiling water. I’ll never forget the day we found the first victim… his face was red like blood, his mouth twisted in a silent scream. But it was his eyes that gave everyone nightmares. Wide open and sunk deep into his skull, they looked so terrifyingly empty as if the man’s very soul had wrenched itself free from that tortured body without leaving any trace of its presence there. A mask of unspeakable horrors.

The press calls him The Hypnotist. Why?

Because he wants us to believe he has the ability to hypnotize people… to death.

I take it you don’t believe in hypnosis then?

What if he really does hypnotise people to death?

Are you suggesting he might be some kind of a supernatural… something? He’s not. He’s just a man who found a new sick way to kill. But make no mistake, he’s as human as you and me. I just need to get inside his mind and figure out how he does it exactly.

Well, detective, I for one really hope you’ll catch him soon. Let’s lighten up the mood a bit, do you know any good police jokes?

What do you call it when a prisoner takes his own mug shot?

Who do you call when Zika infected mosquitoes attack?

The SWAT team. Want me to go on?

Yes, but after the interview or we’ll never finish. I have another question for you.

What is the scariest thing in your job?

That one day I’ll fail to put a serial killer behind bars and innocent people will die because of it. I guess that’s every detective’s nightmare. We all make mistakes and when you’re tired and overworked it’s easy to ignore a lead. And you never know, it could be the right lead, the one taking you straight to the killer.

What is the worst thing about being a homicide detective?

You see the worst in people every single day and it slowly turns you into a cold cynical bastard. I find it more and more difficult to trust people and I tend to see suspects everywhere. It’s all part of toughening up I guess. But then again, you need to be tough and cold in this job or it will chew you up and spit you out and you’ll end up in the loony bin.

That you get to protect people and save lives, you make the world a safer place. You make a difference.

Not really comfortable talking about it, but yes, Dr. Abby Jones, the chief medical examiner, is my better half. And when I say “better” I do mean that literally.

Scumbags like Klaus Von Eckstein who think that just because they are filthy rich they can do whatever they goddamn please without suffering the consequences.

Amarone (red wine), blue (because it calms me down), working out, and I don’t mean in a gym (unless I really have no choice) but in nature and in all weather. My belief is that if you really want a hard body and a tough mind you need to go hand-to-hand with Mother Nature. I run and exercise in the forest and up the hills behind my house and I do it in all weather conditions. Rain, ice, or the fires of hell, it doesn’t matter. The only exception to this rule is when I sleep at the office. Then I have no choice but to hit the gym we have at the police headquarters.

Don’t tell anyone but I’ve bought Abby an engagement ring and I’m gonna ask her to marry me. Do you think she’ll say yes?

Diane May is a crime thriller writer, living in Verona, Italy, with her husband. When she’s not in her office writing, she can usually be found curled up on the sofa with a good book in her lap and a cup of green tea next to her. The only daughter of an army colonel, she grew up on military bases where she learnt about weapons, discipline and the sacrifices of military life. She also worked for many years as a translator and interpreter for the Court of Law on mostly criminal cases. EVO is her debut novel and she is currently working on her second crime thriller, Till Death Do Us Part, scheduled to be released in the summer of 2019.

You can find Livio on the pages of EVO.

Join us next week to meet a retired SEAL operative up against hive-mind androids. Please follow the site by email (bottom-right) to be notified when the next interview is posted.