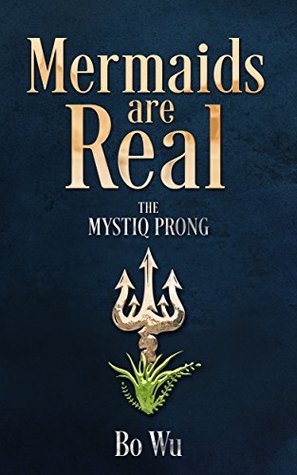 I’ll spend my free time working on honing my Mystiq powers. I see another visit to my dad’s lair again pretty soon, as well.

When I turned thirteen, I found out that the man I had called my dad was actually just a fisherman from Beech Mill and was no more related to me than you are. That in itself was a head spinner.

The fact that I learned this information from him and an octopus put the weird spin on my life in full effect. I then learned I am actually a merman, I am from a hidden underwater kingdom, my real parents died saving me from an uncle who went rogue against the rest of Aquari because of his hatred for the Topsiders, and to top it all off, everyone was looking at me for answers as to where the Mystiq prong went missing when my real parents fled with me when I was just days old.

Add in getting chased by sharks, attacked by my evil uncle’s gang, and a mad dash to reclaim the prong and you get a picture of the adventure I’ve just had.

Personally, I’d be pretty cool with a few pirate ship explorations from now until….I’d be content with that for now.

What did you first think when you first arrived in Sanjowqua ?

Wow! Pinch myself. Am I dreaming? That kind of sums it up.

Imagine a place where the water’s so clear it looks like the fish and other marine life are floating in mid-air. Oh, and the floating islands? Yeah, those pretty much floored me.

I thought I had a handle on the talking animals before I arrived, but when you see them all, when you see and hear them collectively talking and interacting and carrying on like people I grew up with, it’s pretty wild.

I had never been underwater before I got snatched under as the great white busted through the pier, but I had seen shows on Nat Geo and Animal Planet. You have no idea the beauty that exists under the water. It was really like being in a dream. I still feel that way now and I’ve been here for quite a while.

What was the scariest thing about your growth or acceptance of being a merman?

That first breath underwater was pretty high up there on things I never want to go through again. I had no idea I could breathe water. Octavius and Meena put me in a situation where it was, literally, sink or swim, and I’m still here, so…. But getting past the point where I thought I was a goner to the point where the water ran through my gills and out my neck….Well, that was scary.

I guess it’d be like going skydiving and when you went to pull the cord nothing happened. At first, you might forget about the reserve chute and panic, thinking you were gonna die, but once you remembered the reserve and it popped out all nice and full, dangling you in the air, teasing your feet above the spot where you thought you were going to faceplant a few seconds earlier…that would be a very sobering, happy, grateful moment. That’s how I felt.

What is the worst thing about finding out you are a merman?

The worst thing is how the whole transition turned my world upside down. The reality I had been living wasn’t my true reality. I guess it was because I was living it. I could have gone my entire life in Beech Mill and not known any different.

Anyway, finding out tipped the scales and opened my life to a whole new world, but in the process of learning where I came from, I lost some things that are irreplaceable. That hurt. A lot.

What is the best thing about being a merman?

The best thing about being a merman is being able to swim underwater. The things I see every day are alien to me, still. It’s like paddling through a Dr. Seuss book sometimes. The creepy, crawly, bubbly, creatures below the waves are the most interesting I’ve ever seen.

I’m pretty partial to speaking to the animals, too. There’s a lot the animals know that the Topsiders have given up. The Topsiders acceptance and dependence on technology has ruined some of their hardwired natural capabilities. Things like intuition, empathy, and being part of the environment are now foreign to the Topsiders. I’m lucky in that I have a connection to the animals, and therefore one to nature and that’s much more fulfilling than a wifi connection. At least, it is in my book.

My dad and Miss Wendy were the only friends I had before I left. Not that I’m complaining ‘cause both of them were worth a hundred friends each, but they were more mentors and coaches. I leaned on them both to help me make sense of the things I was going through.

Octavius has taken over the majority of that role. I never thought I’d have an octopus as a friend, but the same goes for dolphins, fish, and shrimp, too.

Jaylon and Meena are two of the best friends I’ve ever had. But I guess, they’re more like a big brother and sister, but either way, I’m glad they’re around.

Lin and Yuri are my true friends. Having the two of them to pal around with definitely makes this transition better. They rode me pretty hard in the beginning, but under the circumstances, I can see why. I proved I belong in Sanjowqua and they’ve had my back ever since.

Hate’s a strong word. Hate’s caused a lot of problems. I wish others would see it that way. I spent the last couple of months being consumed by the hate of Gouguon. I’d like to think we can learn from his lesson and move forward with more peaceful solutions toward existence with the Topsiders. Awareness is the first step and I think that’s been exposed after the oil rig incidents.

Up until I got swept away into the ocean, a nice, ice-cold Coke hit the spot, but I’ve come to learn that the best things don’t come in cans. Nature has an interesting way of packaging up nice treats for us. A fresh coconut with Lin and Yuri overlooking the islands of Sanjowqua is about the best way to burn away an afternoon.

Immediately, I’m going back to Beech Mill to visit Uncle Bill. I bet he thinks I died during the shark attack. And since there’s a good chance he saw me or heard about me on the news, I might have a few questions to answer. Uncle Bill is all I have left there. I think he’d like Sanjowqua as much as I do, so I may invite him back with me.

It wouldn’t be a secret anymore if I told you, right?

Bo Wu is a citizen of the world. A humble servant of planet Earth, his goal is to bring increased awareness to the oceans and all its beautiful creatures through the fictional underwater world he’s created in Mermaids Are Real.

You can find Benji on the pages of Mermaids Are Real.

Join us next week to meet a champion sword-fighter from Earth, taken to distant world. Please follow the site by email (bottom-right) to be notified when the next interview is posted.

One thought on “Benji Fisher (of Mermaids Are Real, by Bo Wu)”