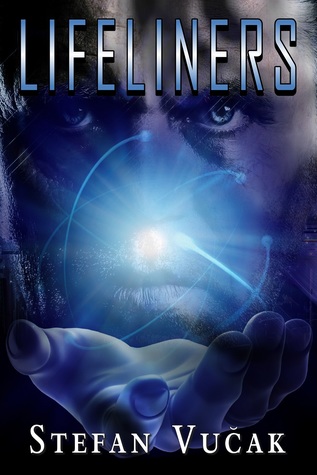 Dear readers, tonight with me is a member of homo renata, the species destined to replace homo sapiens. This young lifeliner, as they are commonly called, is here to tell us about his life in Australia amidst protest marches by extremist groups, riots, attacks against lifeliners, and repressive laws enacted by governments everywhere — and his current position as a Senate candidate for the Lifeliner Party.

What can I say? As far back as I can remember, which is a long way back – my eidetic memory is a dump truck – Melbourne has always been a fun city for me. My twin brother Mark and I spent time riding the trams and keeping our parents from finding out what we were up to. We played pranks on our younger sister Natalie. Let’s face it. We were mean to her, girls having an odd idea of fun. As Melbourne changed, so did I. I knew about lifeliners, of course. They sucked energy from people, and everybody thought they would one day take over the world. When Mark and I turned fourteen, Dad has a quiet talk with us, which turned my bright, innocent world into something dark. Why? We were lifeliners, a secret I could never reveal to anyone, not if I wanted to live.

As a kid, I was never much into toys, preferring to explore the wonders of emerging technology, devouring books, and learning what it meant to be a lifeliner. On a tram, Mark and I would select a donor and jam off him. We weren’t fussy. It could also be a woman. A light touch to establish a connection, and two minutes or so would be enough to drain a bit of life-force, as I called it, without disturbing the donor.

I loved our family outings, having fond memories of our trips to Daylesford. Dad was a QANTAS exec and Mom a graphics artist. I guess some of their smarts must have passed to me and Mark. I must say that our sister Natalie was pretty sharp herself. We had a wonderful time as kids, something that will stay with me always.

Would you believe it? I am now a Lifeliner Party federal Senator! When I fell in love with Cariana Lambert, the last thing I expected was being betrayed by her, something that wounded me deeply. I got it sorted out, but the draconian laws being passed by the federal government to strip away rights and freedoms not only from lifeliners, but ordinary people, and the increased incidence of attacks against lifeliners, led me into politics. There is a lot more to the story, of course, but you’ll just have to read the book to find out.

It was an adventure, all right, although not much fun. When I revealed to everybody that I was a lifeliner, I did not expect the physical attacks made against me, or the vehemence of hatred and fear leveled against all lifeliners. This was not the world I wanted to live in. Having lost my comfortable job, my future uncertain and bleak, I sought the only avenue open to me to change things, or at least raise a voice of reason against growing darkness. How? You guessed it. I was roped into politics by a friend. “You wanted to change things,’ he said with an evil smile. “Well, now is your chance to step up or shut up.” He had me there.

As a teenager, I knew it would be dangerous for me and my brother Mark to reveal ourselves as lifeliners. But it was something abstract, and bad things happened to somebody else. I was never comfortable keeping my secret, but seeing what extreme right-wing groups did to lifeliners, I figured it was better to keep my mouth shut, enjoy my cushy job, and ride it out. My comfortable cocoon shattered when a federal police officer got hold of me and threatened to sterilize me. I realized then that our government, and governments everywhere, would not rest until all lifeliners were exterminated.

What is the worst thing about being a lifeliner?

Never revealing yourself! That was the worst part of living from day to day. Everything I had worked for, everything I had, could be taken from me, even my life, should I reveal myself as a lifeliner. The cops were on the prowl and I feared a tap on the shoulder and being hauled away to be sterilized and experimented on. Some days just weren’t enjoyable.

Being a lifeliner wasn’t all bad, it had its fun moments. Having an eidetic memory, increased intelligence, my body better adjusted to modern living, helped make me successful, but I liked jamming. When the urge came, I would touch some unsuspecting donor, take a bit of his energy, and life would suddenly be sharper, clearer, and I felt I could do anything. I was sorry that ordinary humans could not experience what it felt to be a lifeliner, but I was not responsible for what evolution did. For some, life just sucks.

Ah, love … a face that always changes, yet is the same. A chance meeting with Cariana stirred something within me I thought was dormant, ever since thugs took my Sally from me. Never mind, that’s another story. I feared to lose her were I to reveal myself to her. Would she still love me when she learned I was a lifeliner? And I had to tell her. Living a lie was not an option. Even when she betrayed me, I still loved her. Wasn’t that a crock? It all worked out in the end, but the future is still to play out its surprises.

I don’t hate the normal person on the street going about his life trying to make ends meet. What I came to hate are the scheming Canberra politicians who were slowly stripping away our rights and freedoms under the propaganda of protecting us! I hate the program they initiated to intern and sterilize lifeliners, accusing us for all the problems of failed policies. I guess that is why I became a Senator, to help bring about change. Will I make it? I am hopeful, but it’s a stinking world out there.

Well now, if I told you, it would no longer be a secret, would it? Still, as a newly minted Senator thrust into Canberra’s political cauldron, I don’t know if I will avoid getting scalded.

Stefan Vučak has written eight Shadow Gods Saga sci-fi novels and six contemporary political drama books. He started writing science fiction while still in college, but did not get published until 2001. His Cry of Eagles won the Readers’ Favorite silver medal award, and his All the Evils was the prestigious Eric Hoffer contest finalist and Readers’ Favorite silver medal winner. Strike for Honor won the gold medal.

Stefan leveraged a successful career in the Information Technology industry, which took him to the Middle East working on cellphone systems. He applied his IT discipline to create realistic storylines for his books. Writing has been a road of discovery, helping him broaden his horizons. He also spends time as an editor and book reviewer. Stefan lives in Melbourne, Australia.

You can find Nash on the pages of Lifeliners.

Join us next week to meet two characters that sprang out of their books to confront their authors. Please follow the site by email (bottom-right) to be notified when the next interview is posted.

One thought on “Nash Bannon (of Lifeliners, by Stefan Vucak)”