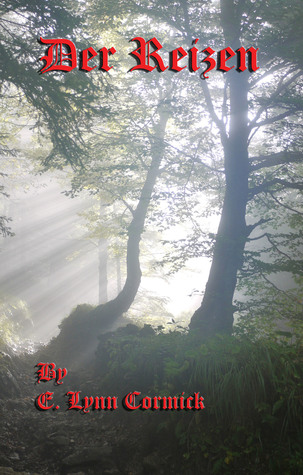 What I do depends on who you talk to. There are those who are convinced I’m a pimp for vampires but it’s more like a liaison between two different countries. I don’t know as I’d call it a fun job, but it most certainly has its moments. I’m not sure which amuses me more, the naivete of the Tiele or the outrageous stories the Germans tell of Tielen. Those are the same two things that irritate me, too, come to think of it. I’ve written a dozen or so travel articles for my editor/sister on hunting Walpertingers in Bavaria, but the Hugelgartens really captured my attention. I wrote a few articles on those for various magazines. Rae-Lynne wasn’t impressed that I would freelance for someone else, but I had a story to write, a tale to tell, that her small newspaper didn’t cover. Right now, I’m working on the boxes of notes that my great-grandfather left me. Some of the information would do well in a book about wartime Germany and the rest of the information would have to be published as fiction in our world. No one would believe that there were Gates between worlds in actual fact.

Adventure?  <laughs> Yeah, I suppose you could call it that. I moved from Canada to Bavaria, Germany to inherit the filthiest hut in Christendom, got to be a pimp for vampires, got questioned about a murder, had to choose one ruler from among many doppelgangers, and then I was tortured until my soul-mate came to rescue me. After all that, it was just a routine scrap with a nutcase and then getting sworn in as High Escort. All in the name of cordial relations between the two worlds, of course. I’m taking lessons in Tiel mind self-control techniques and that’s pretty interesting, too. I’ve learned a great deal about the workings of the average mind and I’m getting to know my way around my own mind. Among other things, I’m learning to control my temper and use it constructively.

What did you first think when you met your soul-mate?

<Herta blushes> I thought one of us had gone over the edge, that’s for sure. He was chocolate on two legs and I was infatuated from the first time I heard his voice. Then I brought myself to my senses, with help from Gebhardt Brunwold. He was the estate lawyer’s law clerk. He gave me a ride down to Kochberg from Munich and helped me get set up. It’s a good thing he was there, too. If it hadn’t been for his cold hand on my arm, I might still be standing on the street, staring at Turan, my soul-mate. I have never had that reaction to anyone before, or at least, not that strong. It’s kinda scary, in its own way.

I think the scariest times were when I thought I was alone with a dangerous person, dangerous to my peace of mind, not necessarily physically dangerous. It took me quite a while to completely trust Turan and, to the best of my knowledge, he feels the same. It makes for some interesting times, I assure you. The only other times I’ve been scared was when Turan was in trouble. I couldn’t necessarily help him out and that helpless feeling was hard to accept. I think that’s part of the reason I lost my temper with Dahila, Turan’s cousin.

What is the worst thing about being soul-mate to a Tiele?

The worst thing? The Tiel can be notoriously stubborn about being Tiele and they don’t always allow that humans can be on a similar level of development as they are. The Tiel are backwards in terms of technology, but they have us beat in mind games. Being a soul-mate to a Tiele means that you’re bounced into the mental gymnastics almost at once, and if you’re not prepared for it, it can quite literally blow your mind.

The best thing? <Herta’s gaze unfocuses for a moment>  Have you ever had someone give you a mental hug? It’s like nothing I’ve ever experienced before. I can feel Turan’s emotions and he can feel mine, to a point. I’m still new at both sending and receiving emotions but I’m learning.  I’m hoping that, some time in the future, I can send him a coherent message rather than just an emotional outburst. His ‘voice’ in my mind is like… like chocolate oozing into every part of my body. I ‘hear’ his voice, even when he’s not right next to me. There’s a link between us that defies description.

I’ve made a couple of friends in Kochberg. Krista Zwitzer is one of the local detectives and Father Edmund is the local priest. I met Krista, originally, through a set of letters they couldn’t translate. It took a few minutes for us to recognize each other, given that we’d never met face-to-face before. She’s got a wonderful sense of humour and likes mysteries. She keeps me grounded when I go off on an emotional spree.

Father Edmund is my family’s “keeper”, if you like. <laughs> And he’s seen the Family Temper more times that I care to admit. Mind you, it’s just not my temper he’s seen. From what he says, I come by my temper honestly. He’s also the one who told me a bit about my family history. Mom never spoke of her relations, nor did her mother. As far as I knew, everyone that was my family in Germany had died, either during or just after the war.

Just Turan. He’s my soul-mate, my other half. He’s the infuriating half. It’s not so much a physical bond between us. Well, there is, but on my part, I’m just grateful to have someone who is on my side. I’ve spent so much time being there for other people that having someone be there for me is a novelty. We still have a few things to work on, but on the whole, we rub along comfortably. The peace is welcome.

I can’t say as I “hate” anyone. I’m not built that way, to be honest. I don’t have the energy to spare to hate anyone. I do, however, have a strong dislike for Dahila and Gebhardt. Dahila was the Tiele who decided that I would make a good pincushion. I thought Gebhardt was my friend, or at least not an unfriend. Turns out, he was in league with Mikhail. And I’m not much fussed on some of the Councilors I have to deal with on Tielen either. They can be right royal pains in the p’toot. Other than that, I get along pretty much with everyone.

I’m a coffee-holic, addicted to the colours hot pink and true blue. The coffee pot’s always on at my house and I’m not sure I have a pastime. I write and enjoy doing that. Of course, I read a lot, too. Mostly science fiction, Andre Norton and Anne McCaffery are my favourite authors, but I’ve been known to delve into an historical romance or two, too. Given some of my adventures with the Tiel, I’m seriously considering taking classes in either knitting or crocheting, anything to keep my hands busy while the Tiel, especially the Councilors, drone on during meetings. At least, if I’m busy with my hands, I can learn to concentrate on what they’re saying and not how they’re saying it.

Well, Turan has this idea that he’s going to apprentice Tiel out to the humans so that the Tiel can learn more about the culture and customs of the areas that they’re likely to be finding their soul-mates. I’m planning on teaching Tiel to any Germans who want to learn Tiel mind techniques and German to any Tiel who want to be part of the apprenticeship program. I’m also planning on learning Tiel mind control techniques to keep myself from fugueing out when someone pushes a memory button. I have the basics of it, but it’s a lot harder than I expected. The Tiel have been learning how to control their emotions and thoughts since they were kids. I’m a late starter.

I’m happy where I am right now, but I live in fear of my sister. I thought I was far enough away from her that I didn’t need to worry about her, but she’s been sending me these nasty emails, wanting me to send her more travel articles. If she were ever to lose her job as my editor, I’d hate to think of what sort of stunt she’ll pull to get me back under her thumb. Making death bed promises is a stupid thing to do.

E. Lynn Cormick was told “writing was a waste of time,” when she was about eleven. Luckily she kept writing stories in her notebooks. Though it took fifteen years to complete, she is very proud of Der Reizen – at times, writing fiction was the only thing that kept her in touch with reality. She currently herds cats in Saskatchewan, Canada while working part-time at the local food bank.

You can find Herta on the pages of Der Reizen.

Join us next week to meet a woman from the peaceful provinces of the Roman Empire, who’s life turned upside down. Please follow the site by email (bottom-right) to be notified when the next interview is posted.