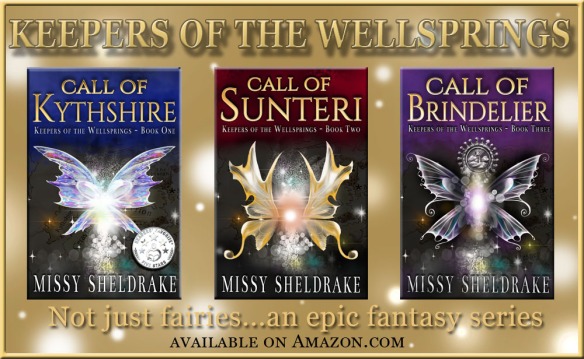 Dear readers, tonight with me is a young girl who trained in swordplay to become a Squire. When she finally earned the honor, her name was mysteriously left off of the list for the King’s Quest. She is here to tell us what happened next to her knight parents and the king’s court, and of the new magical friends she made on the way.

I grew up in Cerion City, in the guild hall of His Majesty’s Elite, where my parents are both knights. Cerion is a beautiful kingdom just in the center of the Known Lands which prides itself on its acceptance of people of all races and creeds. Our kingdom has known peace for many decades now under the rule of the Plethores. His Majesty King Tirnon Plethore is a fair and loving king, and one my family is proud to serve.

Cerion is a cliffside city, and the most remarkable thing about it is its port. Ships dock beside the sheer cliff face, and their wares are brought up to the market using an enormous lift. Sometimes the lift is operated by Mages, especially in the harsh winter months when ice can be a problem. Other times, the lifts are operated by cranks pushed by men. People sometimes use the lifts as well, but most tend to prefer climbing the stairs carved into the cliff wall.

My favorite toys…hmm. Of course, the wooden practice sword my parents gave me when I was very young. I played with that often. Rian and I—he’s my neighbor and my most cherished friend, his mum is our guild’s leader—we used to play at sword fighting in the guild practice pitch often. That’s until he decided to take up magic under Uncle’s sharp eye. Mages don’t use swords, so that play was eventually set aside in favor of books and study for him. I have so many fond memories of my childhood. The guild was always kind to me. They would play at swords with me often. And of course my memories of playing with Princess Sarabel in the palace gardens and later her little sister Margary will always be dear to my heart.

Now that I’m a knight, I’m considered a full member of the Elite. But things are complicated, because not only have I earned that position, but I’ve also gained the trust of the fairies of Kythshire, our allies. This is tricky, because they have kept themselves secret for so long that many would think me a madwoman for talking about them as though they’re real. But His Majesty knows they are, and so do my guild, and so right now, I act as an ambassador for them and their country. After Kythshire’s Wellspring (the source of magic in Cerion) came under attack, I fell into the role of protector. Maybe someday, the fairies will be able to reveal themselves to our kingdom and not live in secrecy. For now, I act as a covert guardian, protecting them from the recent scourge of Sorcery and more sinister magic which has been threatening our peace recently.

So much has happened since our encounters in Kythshire that I barely feel like I have time to answer this question. My head is spinning, and honestly, I’m not sure how much I can say. You see, strong wards protect the workings of magic. These wards keep me from talking about anything that you aren’t meant to know. I will tell you that there is a threat unlike any Cerion has seen encroaching on us. The age-old tale of good versus evil, light versus dark. We have learned that Sorcery is not as obscure as we had thought. These Sorcerers, corrupt Mages, have been lying in wait for generations, ready to claim the Wellsprings, our sources of magic, for themselves. Recently, I’ve learned just how it feels to wield magic. It’s like a drug. The more you use it, the more you want. It starts to consume you, and you begin to care about nothing but the flow of it. These Sorcerers, blackened by Mage Mark (a Mark that spreads across the skin when magic is abused), hiding in shadows, have started to band together to work toward one goal: lay claim to the Wellsprings. If they succeed, the Wellsprings will be depleted. Drained and wasted. We saw it happen in Sunteri not long ago. The result was devastating for the fairies who lived there.

What did you first think when you first found out that the fairies of Kythshire were real?

I didn’t believe it at first. Fairies were pretend things, children’s games. Even after Flit appeared to me in my room, I had trouble believing she was real. I mean, here was this tiny lady with sparkling wings and hair of every color imaginable, no bigger than my palm, scowling up at me. She was so furious, but so adorable at the same time! I still laugh when I think about that first encounter. Hmm. You probably shouldn’t tell her I thought she was adorable. She might think I’m being condescending.

Looking back, I think the scariest moment for me was being held in the Dreamwalker’s grips. I was overcome by such an emptiness…I forgot myself, and everyone I loved. He was all that mattered to me. I forgot that I could fight, that I should fight. I couldn’t even remember my name. I had never encountered such dark magic before. Sorcery is truly terrifying.
What is the worst thing about growing up in His Majesty’s Elite’s guild hall?
Huh, I never really thought about it. I imagine it’s the noise. It can be rather noisy, with Da working at his forge right outside my bedroom window, and Bryse and the others can get into some loud arguments in the gathering hall. Sometimes the crowds of onlookers can get intimidating, especially when something big is happening, like a quest announcement or a decree from the king. I don’t really like all the attention our halls seem to draw during times like that.

My best friend, like I mentioned before, is Rian Eldinae. He’s the son of Mya and Elliot Eldinae. Mya is the guild leader. You have probably heard of her. She’s one of the most sought-after bards in Cerion. Rian’s Da is a wood elf, which makes him a half-elf. Rian and I have grown up together as the only children in the guild hall. We don’t really have outside friends. He’s very dedicated to his studies, and I have more rivals than friends at arms training, so at home, he and I are very close. Our guild is on the small side. There are eight members: Mya, Elliot (our scout and bowman), Mum (she’s a paladin) and Da (he’s a shield master and armsman), Cort (a swashbuckler from the Stepstone Isles) Bryse (a stone giant and shield master), Donal (our healer), and Uncle Gaethon (our Master Mage). I consider them all my family.

What do you really hate?

Sorcery. Those who are too blinded by their greed for power that they will stop at nothing to destroy everything around them just to feed their lust for it. They don’t see the need for love or respect. They stoop so low as to even command the dead. They are unnatural, wicked, and cruel. Now that they have begun to grow as a united power, they have to be stopped.

My favorite drink is mulled spiced cider. My favorite color are our guild colors: Blue and gold. My favorite pastime is relaxing in Rian’s arms in the peace of the forest park just outside of the palace walls.

So much. Right now, there is so much turmoil that it’s difficult to look too far into the future. I know we will be fighting fiercely against the agents of Sorcery, and I know that Rian will be beside me always. I will always be loyal to Cerion and to Kythshire. Those are all a certainty. Everything else…I imagine we’ll have to wait and see how things unfold.

Secretly, I’m a little bit jealous of Flit and her new friendship with Alex. I don’t know if it’s the stronger bond we share now that makes me feel that way, or what, but I’m starting to understand why she’s always tended to give Rian the cold shoulder. I don’t like knowing she’s spending time with someone else. It’s silly, I know, but I can’t help it. Maybe it’s some sort of strange fairy magic.

Missy Sheldrake is an author/illustrator who has been conjuring images of fairies in one form or another since she was very young. The wind in the trees and the rich scent of forest earth are her most treasured sources of inspiration, and on most mornings you will find her wandering the wooded paths, dreaming of the next adventure she hopes to put to the page.

Missy was born in Connecticut and attended Western Connecticut State University, where she earned a Bachelor of Science in Art with a concentration in painting and illustration. Even then, in her free time, she was writing. She moved to Northern Virginia several years ago and lives there now, on the outskirts of Washington D.C., with her true love and their son. She published her first novel, Call of Kythshire, in March of 2015 and intends to keep writing as long as the fairies allow it.

You can find Azi on the pages of the Keepers of the Wellsprings series: Call of Kythshire, Call of Sunteri, and Call of Brindelier.

Next week we will be hosting a young woman who will tell us of her fight for survival as she and her friends crossed a post-apocalyptic world in search of a newer, better sanctuary for humanity following a meter hit on Earth. Please follow the site by email (bottom-right), via Twitter or like our Facebook page to be notified when the next interview is posted.