Wenn Twyner (of Escape from Neverland by Nils Visser) 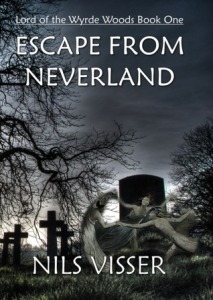 Dear readers, remember all the times your mother told you not to stray into the woods? Well, tonight with me is a young girl who didn’t quite listen, and went strolling into the Wyrde Woods. Only a few miles away from the dilapidated council estate where she lives, but worlds apart.

She is here to tell us about what she saw, and how her perceptions were challenged.

I’ve been mangled in the care system for most of my life. Care homes, institutions, clinics and, erm, sometimes juvenile detention. It wasn’t….it wasn’t safe, that’s all I have to say about it. Some places were worse than others, but none offered any sense of security.

My cup of tea was reading. I’ve always been a voracious reader. So I suppose my favourite ‘toy’ was Susan Cooper’s The Dark is Rising series, especially Greenwitch. I literally devoured those books. Reading was an escape from whatever dump I’d been placed in. As for memories…..sometimes I have very vague memories of my mum and dad, a few images, but they’re like blurry photographs, the focus always just out of reach. Then again, I might just be projecting, my imagination playing tricks on me.

I ended up at the OJCH in Odesby. At first things were alright, in a forlorn hope kind of way, but then…..things took a turn for the worse there. I went for a walk to vent off steam. A long walk which took me to the large woods north of town; the Wyrde Woods. Except they seem like more than just a woods. It’s difficult to explain but just about everything that happens there seems like an adventure to me.

What were your first impressions of the Wyrde Woods?

I was soaking up pure nature. The bluebells were out, the Rore’s water was clear, there were squirrels, rabbits, birds…..so many birds. It was very serene, made me feel relaxed for the first time in ages. Then I met Willick, he’s an old-timer who lives in the woods, full of stories about…..creatures he claims live in the woods. He showed me the Giant’s Grove. Those trees are sirageous! But that’s just the surface of the place, I think. There’s lots of layers, I’m just beginning to catch a few glimpses.

Because I am terrified I’ll mess things up again. I’m good at that. I don’t want to mess this up.

What is the worst thing about the Wyrde Woods?

Having to leave them after a visit.

There’s a woman who lives in the Wyrde Woods, at The Owlery, Joy she’s called. She’s very wise but also has a great sense of humour. She speaks oddly, ‘proper broad Sussex’ she calls it. Joy’s lived in the Wyrde Woods all her life and she has made me feel welcome. Part of the place. That may not seem like a big deal if you live in a real home, but it’s never happened to me before. I feel safe there. Then there’s Willick and Joy’s grandson. Woodfolk too, the both of them.

*blushes* I hope so.

Catherine Malheur, she lives at Malheur Hall on the edge of the Wyrde Woods. Big fancy place, dead posh. She owns the Wyrde Woods but she’s just interested in making money, not the woods or their history. A right toff.

Well, the idea is that people will holler “O wilt thou leave me so unsatisfied?” at the end of Escape from Neverland. Rush to buy the sequel, Dance into the Wyrd. That was meant to be the end of the series but a small group of Wyrde Woods diehard fans are clamouring for a third book as well. They like me, who would’ve thought?  *grins*

Other than that there’s another series, Secrets of the Wyrde Woods, which delves further into Joy’s past. I dunno how it’s planned but I am expected to make a cameo appearance in there, because all the stories are linked. My story, Joy’s story, Willick’s story and then the Wyrde Woods stories. Oh, and the stories within the stories.

The OJCH idiots keep spare keys on a ledge just above the med cabinets in the storage rooms in the basement. We crush white tablets, all sorts, and mix it with the sugar in the sugar pot in the staffroom. The ones who take sugar in their tea are far more manageable. Seriously, do not pass that on to anybody.

Nils Visser was born in Rotterdam in 1970 and grew up in the Netherlands, Thailand, Nepal, Oklahoma, Tanzania, England, Egypt and France. Having been told once too often that he was living in his imagination he finally got the hint and moved there on a permanent basis. He sends his regards from the Wyrde Woods

You can find Wendy in Escape from Neverland and Dance into the Wyrd.

Next week we will be hosting a special young girl, who trained in swordplay to become a squire – although things didn’t quite turn out the way she expected. Please follow the site by email (bottom-right), via Twitter or like our Facebook page to be notified when the next interview is posted.