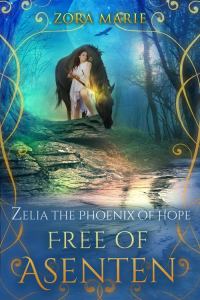 Dear readers, tonight with us is a desperate girl facing a harrowing choice. Will she be the rising of hope or despair? Join us as we talk with her about her magical upbringing.

“I spent most of my childhood a little south of the Mountain of The Old Ones. It was okay, the land was beautiful and most of the species that lived there were kind to one another. It’s just, it could never have been my home, not with everything that was done to me and the things I was forced to do to others. No, where I truly grew up and learned was before that, even if my time there was comparatively little. I was raised by an elf in The Elven Kingdom of The East, until my first death. After that is when I was bound to that cave, with magic concealing me from the world with only those I was forced to torture and kill being allowed see me. Of course that is with the exception of Asenten since he was the one holding me captive.”

“Toys, no, but I did play, dance, and sing with the elves. There is one elf in particular that I connected to more than others, of course that was only because it was his father that took me in and we spent a lot of time learning all kinds of languages together even though he is about five hundred years older than me. Outside of the elves there is Loki, we share a psychological connection that causes us to see what each other did that day. I believe it was that connection that shielded me from being completely corrupted by Asenten and in the end it is that connect that freed me. There is also another being that I hold a physical connection with that makes feel everything that he feels, for a Light Elf Prince of another realm he sure does trip a lot, but since I was created instead of born I really have no true family.”

“The wizards that created me did it in the hopes that I would be a Phoenix of Hope that would sway the wars to come and that’s just what I am going to do, even if they no longer wish for me too. As a being that has been to both underworlds and come back more times than I care to remember, it seems as though there could be no one better to sway the tides of wars as I always move to save as many lives as possible even if it means I have to go back to the deepest depths of Tartarus.”

What did you first think when you first learned that the Dwarf Prince Connan had been kidnapped?

“That I had to save him, he was the first being that was able to see me in over two hundred years that I wasn’t being forced to torture and kill. And his words were the first kind ones that had been directed at me in a long time. He might be a Prince but he wasn’t above talking to someone far below his stations, he definitely took after his grandfather. Though the attack of the dragon Knightoff has changed him. He no longer holds much appreciation for the humans or most of the elves, but who could blame him after all he has been through and the way people treat him and the other dwarves. One day I will restore their place under the mountain, but I need to find out why Knightoff attacked them in the first place as I don’t feel he only did it for gold. I’ve heard far too much about the female dragon he fell in love with too believe the stories of dwarves or men.”

“The prospect of watching my friends die before me will always be the scariest thing that I’ve experienced. The past may haunt my every thought but what happens to me matters not.”

What is the worst thing about having all the powers that you hold?

“The powers I hold don’t all get along, my powers have actually caused several of my deaths as they fight against each other and rip me apart in the process. It is a tedious task to keep them all in check without having any… shall we call it outbursts? Yeah, that’s the closest description I can come up with since certain powers have to be used otherwise they build up until I can no longer hold them back without killing myself.”

“The ability to save innocent beings is really the only positive worthwhile.”

“Now that I think about it, I could be here for a while if I named all of the beings I have made friends with since being freed from Asenten. So as not to talking your leg off I’m just going to stick to friends of this realm. As far as humans go there is Prince Aurthor of Coridale, Knight Luxly of Coridale or Lucky as all his friends call him, Jones the boy who found me when I returned from Asgard and took me to Coridale. For dwarves there is James and Norwick, the kind hearted friends of Connan. And for elves there is Eadon and his adopted elf son Leaglon, the only two beings in the realm that once full heartedly considered me kin.”

“Um, no, I may be around five hundred years old but I am still only a child.”

“Any creature that would harm an innocent being, God or not, and sometimes even myself for that very reason. There will always be evil beings in this world, but I would like to think that even those that are evil still have some good left in them. If I ever stop believing that I don’t think I would be able to live with what I have done to others.”

“I love to look at the stars and watch the sunrise and sunsets, I guess I get that from all my time with the elves.”

“I plan to go to Dragon Island to learn about the younger species of dragons. But I fear I won’t be able to stay long, it seems that war is brewing on the mainland and it’s not as if the Norse or Greek Gods ever interfere with the area that the elves realm.”

“Only my creators really know this, but I am a link between the Norse and Greek Gods. They have been at odds with each other for longer than even the elves remember. That’s part of the reason I was created, a war between the two sets of Gods is brewing. I only hope that I will be able to do something about it when the time comes.”

Despite all odds against her, including lightning strikes that fried multiple computers, Mother Nature couldn’t keep Zora Marie from getting this story out for the world to see. She is a Jill of many trades who has done everything from bottle-feeding calves and being a midwife for a wide variety of animals to making picture-perfect wood burnings and yarn from her home raised angora fiber. As things slowed down around her the story of Zelia, that had been knocking on the door for quite some time, decided to knock the door down and pour across her keyboard to bring you her first novel!

With all that said she hopes you enjoy learning about Zelia and that you’ll want to continue to follow Zelia on this crazy journey we all call life. You can find more about her on the following stops on her blog tour:

Or, if you can’t wait, you can find Zelia directly on the pages of Free of Asenten.

Join us again in our regular schedule on Friday, to meet a member of a truly alien race, from the furthest reaches of the galaxy. Please follow the site by email (bottom-right), via Twitter or like our Facebook page to be notified when the next interview is posted.