Bane Shaw (of Closer to Home by Regan O’Leary) 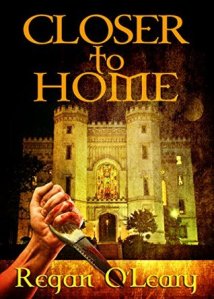 Dear readers, tonight with me is a Scottish musician, now living and working in Hollywood South (that’s the south Louisiana film industry, for those not in the know).

He will tell us of his move, and of some dark secrets from his past that haunted him across the Atlantic.

It’s rumored that you drink a lot of whisky, is that true?

Aye, well I suppose the answer depends on your definition of “a lot.” Let’s just say I enjoy whisky like the true Scotsman I am.

What is the story behind your nickname ‘Bane’?

(Wry laugh.) Well, it means ‘Bone’. The week I turned eighteen I got a job at the public house of the Hill’s Hotel. I worked as a barman. But, bartending at night at The Rigg sometimes required breaking up fights, especially during football matches between the Rangers and Celtics. The rivalry is as old as Glasgow itself and has more to do with religious bigotry than football so things often got intense inside the pub. My manager gave me the nickname, “Bane,” because, more times than not, anyone I had to throw out of the pub left with a broken bone. END_OF_DOCUMENT_TOKEN_TO_BE_REPLACED