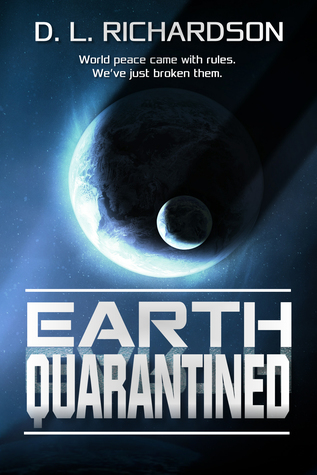 Dear readers, in 300 years, when the virus which killed millions of people is gone, humanity lives in a planet-wide quarantine enforced by an alien species.

With us is a young woman, here to tell us about life and her surprising role in that society.

My name is Neah. I’m 24 years old and I live in an underground city with 200 other indwellers. We call our home ‘the station’ because it’s a converted power station from before the Great War. It’s busy, noisy, crowded, and above all, smelly. Picture taking a shower right after someone else and you can see why some of us would kill for a bit of privacy. But it’s the only home we’ve ever known so who’s to say it isn’t the only way of life?

We’re the survivors of a devastated world. We learn to live and die in the station. There’s no going outside because the land is still toxic from the Great War. But there is an air of curiosity around the place. Why are we here? Will we ever leave? Will we meet an outdweller who can tell us what their world is like? Who is stopping us from seeing this devastated world with our own eyes?

Our toys are cherished possessions because they’re the only connection we have to our natural parents. You see, as babies we are delivered to the station to wait out the devastation. We grow up knowing where we came from, but we never know who our real parents are of if they’re still alive.

Outdwellers travel for miles to deliver their offspring to be raised by us in the station. They’re placed in quarantine and often the babies are delivered with toys or stuffed animals. My favourite toy growing up was a set of plastic keys. I was always curious about what the keys might open. Probably explains why I entered the security profession.

I’m a sentinel – a law enforcer – and I’ve just taken on a senior officer role. A sentinel’s job is to search for breaches in the walls so the toxic air from outside doesn’t get in. We also do visual checks of the water recycler and oxygen bays. A normal shift is eight hours, which leaves plenty of time to hang out in the entertainment hub or spend time with the family. It’s not like we have a lot of options for jobs inside the station. Every role must have a function and anything else is done in our free time.

But my true role inside the station is to learn how to be a High Council Leader. I’m the daughter of one, and it’s a role that will pass to me shortly. I’m not happy about it. Too much political bull crap for my liking.

At the moment I’m investigating a death in the station, which isn’t the norm, because most of the deaths in the station are as a result of sickness or because a person has committed an unpardonable crime. This investigation is my first task as a senior officer. I don’t want to blow it. I also don’t want to report my findings. They’ve led me down a path and there is no turning back now. It’s dangerous and exciting at the same time. I’m about to find out about this outside world that’s been forbidden to us for two centuries. You see, while investigating this death, I found a map and a secret door…

What did you first think when you first ran into someone from the outside?

Betrayed. Foolish. Angry. Excited that I might get to meet my real parents. Relieved that I didn’t drop dead from toxic radiation. And back to feeling betrayed, angry, and foolish because I’ve lived my entire life believing the outside world is toxic. Feeling the sun on my face for the first time was the most amazing thing. And yet, as I stared up at the sun and the stars, I couldn’t help but feel they belonged to thieves and liars.

What is the worst thing about living in the station?

The cramped conditions. You can’t escape people. There’s no privacy. It’s hard to keep anything a secret in a place as confined as this. Hard to hide a bruise, a broken heart, or even a memory, since the deepest recesses of a person’s mind are as open to public scrutiny as a bad haircut. I often find myself in a small room with the anti-radiation suits because it offers some sort of privacy. Sometimes I talk to the suits. That’s the other part of living in an underground station. Isolation sends you a little crazy.

The connection with the building. I can hear the heartbeat of the station, feel its pulse when I press my hand against a wall, hear its sighs in the machines, feel its kisses with the air vents. The station and the indwellers exist as one. Without us, the station would fall apart. Without the station, we would die of starvation and asphyxiation.

It’s complicated. I used to be married, and I still love my ex-husband, but there’s a gaping hole in my chest that was left there by my daughter’s death. Something like that just shuts down the love you once had and you learn to wish for other things, things that don’t hurt as much.

I hate the outdwellers. They caused the Great War that resulted in getting locked away. We have no communication with them, it’s forbidden to even want to meet an outdweller. They should be fixing up the planet so we can return to reclaim the land, and we have no idea what they’re doing up top, but we’ve been in the station for almost 200 years. Why have they not done everything in their power to rid the planet of the toxic radiation? Surely it should be gone by now…

We have entertainment quarters in the station. There’s a game – we have no idea where it came from – but you wear a suit with sensors and you take on the persona of a character, like an eagle or a wolf. The killer wasp is quite lethal. So you can either control the avatars or fight alongside them. It’s called junga, and it’s a great game for my brother Wes, who is in a wheelchair. For a few rounds, he can fight like the rest of us and feel as normal as he’ll ever feel.

My favorite drink is the honey beer we make from the bees that pollinate our crops. I don’t believe I have a favourite colour. Colour reminds me of fun and I’m not in the mood for fun at the moment.

My future is unclear. I stumbled upon a secret door and made it outside to the city where millions of outdwellers live in comfort. I’ve uncovered the lies that are keeping me and my people hidden away. But I’m not envious of the outdwellers, not after spending time with them. They are corrupt. So what do I do? Do I stand up and fight against the outdwellers and turn my back on the sole reason for our existence, which is to rejoin them one day? Or do I continue the lie and keep my people safe?

Okay, that’s a total balls-up lie. One thing I learned during this great adventure is that everyone is lying to everyone and the only way to get anything done is to keeping lying. I know exactly what my future holds. I plan to build up our strengths and resources and get the hell out of this station and take the city as our own.

D L Richardson writes speculative fiction, which encompasses science fiction, light horror, supernatural fiction, and fantasy. When she’s not writing, she can be found wandering in her yard waging war on weeds, watching back-to-back episodes on Netflix, playing her piano or guitar, curled up on the couch reading a book, or walking the dog.

You can find Neah on the pages of Earth Quarantined.

Join us next week to meet a man from the ancient world, discussing gods, slavery, temples, and magic. Please follow the site by email (bottom-right) to be notified when the next interview is posted.

One thought on “Neah (of Earth Quarantined, by DL Richardson)”