Michel Anglo and Vipa (of God’s Forsaken, by David Brevik) 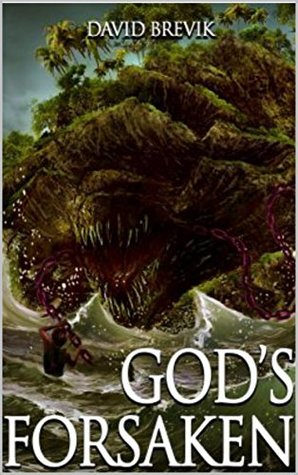 Dear readers, tonight with me is an angel and a human woman. This isn’t the first time we interview such a duo, but this ‘Angel of Death’ is merely the professional moniker of a ruthless assassin.

Together, and with some unusual friends, they had to destroy a forsaken god. They are here to tell us of their adventures.

Michel Anglo: Well, their isn’t much to-

Vipa: Me first, me first! I was raised on Congla island after the Guilty One stranded us on an isolated island. Father died when I was just a baby, but Mom was an incredible huntress. Taught me to waterbend, hunt, and all that fun stuff.

Michel: Which I assure you which is abnormal. Where we’re from most people are work in factories or farms. My aunt and uncle adopted me and we lived in Kalaim.  Almost became a factory work if it wasn’t for my… assassination skills. Good things too. Damn factory is as dangerous as this crazed huntress I’m working with.

Vipa: Says the guy who hunts the world’s most dangerous predator.

Michel: I’m talking first this time, Vipa! Our family was poor, so there wasn’t too many toys. Yet my uncle got me a gun and a knife. Good for hunting and my friend used to play games just as knocking over cans who can piss off demons.

Michel: Hey, as my aunt said, ‘Demons have granite skin. You have easier time breaking iron.’

Vipa: Wow, that depersing. I used to have tons of friends and toy to play with.

Michel: I thought you lived on an island alone with my mother.

Vipa: Not just my mother. I have old Nubby the goat. Oh, we used to play tug war all the time. Oh, and then there this one time where mother left me alone in the woods when I was five. I cried so much, but then I made a doll and it kept me company. After surviving in the wilderness for a day, she gave me honey as an award.

Michel: *Stood dumbstruck for a bit.* Please never leave my children along with your mother.

Vipa: Why? She’s a good person.

Michel Anglo: My real job is assassination, so I go around killing people. Not that complex, though I tend to spend week researching my target before going after them. Knowledge make life easy. As for my day job, I’m a sugar merchant. Spices and sugar are expensive and pay good.

Vipa: Now Michel help me hunt down the Guilty One.

Michel: Against my will! This crazed huntress is dragging me along for her crazed adventure.

Vipa: Which isn’t easy. You try tracking down a living island.

Michel: I’m being held against my will to hunt down Tragun! He’s a Guilty One- one of five beings who failed to defeat the gods and now a monster.

Vipa: Oh it isn’t that bad.

Michel: He can kill people just by popping out of the water!

Vipa: Cool right! We’re hunting him down to learn the truth of the Guilty Ones and to end his misery. Now if only my ‘slave’ stop being so dramatic.

What did you first think when you find Tragun?

Vipa: The first time or the second one. Good grief, for heroes of this story, we suck. I mean, we find Tragun, almost got on his back, and then boom! It’s all over. Good Ogun! I jumped into the water and chased that asshole down.

Michel: And I spent a good few minutes having a mental breakdown. Having freedom snatched away like that isn’t good for soul.

Vipa: Or boy. I know what it like to be a insect in a zapper

May not always be applicable, but give an insight into how the character felt as events unfold..

Michel: Vipa, hands down. That crazed huntress will jump into a lake that freeze people to death on contact. You know what she did to counter that. Smear moss on her that burns the skin!

Vipa: You’re upset you didn’t get to touch my ass.

Michel: *Blessing deeply* Oh shut up. What the scariest thing for you?

Vipa: Watching a friend I thought I knew turn into a monster.

Michel: … Okay, I admit that was rather scary.

What is the worst thing about living on a small ship?

Vipa: My turn to speak first! Try staying on a ship, days on end, with little entertainment but whatever games to come up with. I love Truffle, but it is boring on there.

Michel: That because your stupid cat isn’t biting me twenty-four seven.

Vipa and Michel : Traveling. *Both look at one another in surprise.*

Michel: Surprisingly, you can make a lot of good friends when visiting differ isles. There’s also getting to know the people on the ship.

Vipa: Aw. *Vipa hugged Michel* I like you to.

Vipa: And you’re a prude who somehow produce kids.

Vipa: Oh, Sainh and Ozrsebet are the best. Sainh this cool lizard humanoid that can throw things about with her gravity. I love how she can move entire ships with ease. All the while never losing her cool.

Michel: Unlike Orzsebet, who act like he run the ship. We entertain him, but let be honest. That guy seem a bit of extra.

Vipa: Hey! He helps us a lot and he risking his life like everyone else. Just because he a little haughty doesn’t mean he useless.

Vipa: Oh, I dated satyrs, humans, centaur, a tengu, and even a squid once. *Giggles* The last one was… interesting. As for now… Nobody of interest of yet. Nothing between Michel and I, though he’s a babbling idiot just seeing me naked.

Michel: Its’ common in our country for people to go around in little clothing. *Groans* Lucky me. I’m recently widowed, so I’m not looking for a girl right now.

Michel: I wished we can just get on Tragun’s back with little problem. All his moving around is annoying.

Vipa: Can’t say I hate anyone in particular. I mean, even with Tragun, he’s more of a victim than anything else. Not sure what wrong with Druad though. He give of bad vibes.

Michel: Clean my guns, I like good old berry smoothie, and blue.

Vipa: I like blue to! Though I rather just play around with my figurines. Sainh make them and I’m used them to play adventure games, drama, or wars. I love playing the war between pie god and cake lord! Who the best pastry!

Vipa: Tragun the first of five Guilty Ones, so we got four more hunts to do.

Michel: We? I got children to return to.

Vipa: Oh com on! Don’t you enjoy my company at all.

Michel: *Blushing a little as he looked away* Well, you are certainly a lively person to be around.

Vipa: When I was younger, my mother used to disappear whenever there a low tide. *Frowning in confusion.* Honestly, I don’t know where she go. But sometimes, she be gone for hours before she return. It worries me, but hey! She one of the strongest people around. Nobody can beat her. How about you Michel. I bet my secret is better than yours.

Michel: Frankly, you already know my secrets. Expect… will it less of a secret and curiosity with Truffle. She has been acting strange after we took out Tragun.

David E. Brevik has spent most of life traveling around America and seeing new things, without a hometown. He started writing at thirteen and have kept on going ever since. After graduating from the University of North Dakota with a degree in anthropology, he’s still trying to find a way to use it.

You can find Michel Anglo and Vipa on the pages of God’s Forsaken.

Join us next week to hear from an other-worldly entity masquerading as a PE teacher. Please follow the site by email (bottom-right) to be notified when the next interview is posted.