Roach the Demon (of Our Frail Disordered Lives, by Mary M. Schmidt) 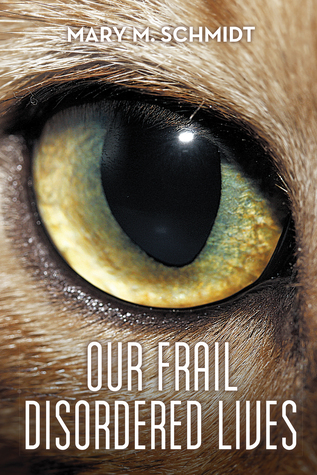 Dear readers, tonight with me is a guest of a class we do not normally get – a demon.

He’s here to tell us about heaven and hell, and what lies in between. After working for Satan and trying to sign on new souls, he ended up in a (literally) hellish prison.

I’m a demon.  You know that, right?  I was created as angel in Heaven.  I was so gorgeous, I could not stop admiring myself, even for choir practice!  But I knew I could create something much better. I was so great, see?  So, when my boss…he was Lucifer back then, approached me and my buddy (that’s Scorch) and said he was gathering an army to overthrow the Creator, all we could say was, Tell us more! Sheeesh, if only I’d known what a jerk he’d turn out to be!  Do I regret my choice?  Well….no. That’s all I can say about it.

I was never a child, so no toys.  As for cherished memories…Hell, no!  Just sad ones.  Like….being stuck in Pandemonium Hall while Satan, that jerk, was setting up the itinerary with those 2 poets.  Dante and Virgil.  And I just knew that whatever they came up with would be a classic of Western civilization.  And I wanted so badly to show them how evil I am.  But, no!  Only the A-list demons were included! I was devastated!

Not much.  I’m stuck in a high-security prison for making such a mess.  I almost made it big, you know?  That close!

It started out when I just could not take it anymore.  Satan sent me to get a signed contract for Larry Kavanaugh’s putrid soul.  And I did.  Was it good enough?  Oh, no! What the Hell more does he want?  It occurred to me, for eons, I’ve been handed the most crappy assignments, then Satan dumps all over me because whatever I do isn’t up to his standards.  I get set up every time.  So I said, no more, and ripped off my tracking device. Then things started to get good.

What did you first think when… ?

When I met Dorothy?  All I could think was, oh, no!  Because all I saw was what was on the surface.  All of that virtue, sheeesh!  But once I was able to use Scorch’s connector, I knew she was a fake.  Inside, she was just as mean as ever and thought of herself as superior to everyone else. She was wallowing in pride like a pig in slop. In no time I had her down on her knees in front of me, begging me to corrupt her even more. What a joy it was to work with Dorothy.

You think it was being exorcised?  No. Those cats!  Those damn cats!  I broke into the Kavanaugh house after dark and found a copy of Dante on the coffee table.  That made me so mad!  Then I heard this hissing sound.  All I could see were their eyes in the dark.  And then they attacked me.  The brown one got away from me. The white one rammed that potted plant, dirt and all, down my throat.  They scared the living shit out of me!

What is the worst thing about the prison?

About Hell?  Just about everything.  Loud, dirty, and the worst of all is dealing with the damned souls.  Always whining, what did I do to deserve this? I was such a pillar of my community, active in my church.  And you have to keep reminding them, yeah, but you raped little kids in your spare time. They keep forgetting.  Stupid!

Let’s just say: better to rule in Hell than serve in Heaven.

Scorch and I have always been buddies.  At first we were treated the same: given all the crappy assignments.  Then once computers got invented, Satan couldn’t figure them out.  But he did find out that Scorch had a gift for high tech.  So Scorch is running the whole IT department, and he’s got a much better deal than I do.  But we’re still buddies. Damn nice of him to help me out.

Satan. He’s a liar, he’s a jerk, he’s a scam artist, you can’t believe one damn word that comes out of his mouth.  Let me tell you, I, Roach, could do a better job of running this place than he does.  Plus, this continuing education thing he’s got going on?  How not to get exorcised?  Boring!  That’s why I don’t pay any attention.  I rip the pages out of my notebook and make paper airplanes. That gets his goat.

Gall and wormwood is refreshing, I like pitch black.  Pastime? Imagining Satan groveling before me, pleading for mercy, as I laugh at him and plunge my pitch fork into his gizzard.

Right now it doesn’t look like much.  I’m stuck in here.

Let me tell you, it’s no secret.  All of Hell is computerized.  That includes this prison.  All Scorch has to do is press a button and that door pops open.  We have discussed this.  Never mind how.  We’re just waiting for the right time.  And when I do get out, I’ll be many times more angry, more evil.

So don’t say you weren’t warned.

Mary M. Schmidt is a graduate of Notre Dame University in Baltimore.  She spent time in Rome during the ’60s, getting to know the feral cats.  Her previous book, Cat Lady, is about that experience. Cat Lady won the Jaffalogue’s Picks award for best long narrative published in 2015.

Mary works for a local hospice doing transitions, that is, assisting terminal patients with their end of life procedure. This is not in the least bit depressing! She makes her home near Annapolis with her cat Graycie.

You can find Roach on the pages of Our Frail Disordered Lives.

Join us next week to meet an unwitting time-traveller. Please follow the site by email (bottom-right) to be notified when the next interview is posted.

One thought on “Roach the Demon (of Our Frail Disordered Lives, by Mary M. Schmidt)”