Cora (of Grim, by Gavin McCallion) 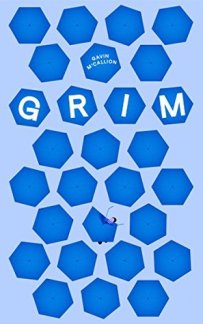 Dear readers, tonight with me is a young woman, with a unique heritage.

With two dads and a year she was locked up in a basement and forced to practice her music, she has a very intriguing tale to tell.

Hey, I’m Cora, I’m nineteen and excellent. I’m from a little, angry, wet island called Wilson’s Well. It never stops raining and everything is grey. It’s a population of workmen, cafes and pubs. We’re all just getting by.

Living there is miserable for people who aren’t – well – umbrella salesfolk, I guess.

That seems harsh; the Well isn’t so bad. It’s just not great.

Favourite toys? I don’t think so. I was a loud kid with some hyperactivity issues. I never settled down with toys. I was doomed to be a musician. Way before I can remember, I pulled a whole load of pots and pans out of a cupboard and hit them as hard as I could until my dad came to shut me up. He’s since told me how brutally hungover he was that day and that he ‘felt like chucking me out the window.’ I heard that story so much growing up it must’ve subconsciously forced me into drums. Parents fuck you up.

Oh man. Right. You ready? I got black-out drunk one night – which was my brand at the time – and woke up in a basement with four other incredible musicians. With me? Cool. So, there was this ridiculous, eight-foot-tall cyborg who kept us there under orders from a lunatic in tartan trousers who needed the best musicians in Wilson’s Well to perform at his “Gala” where he planned to blow everything up. This guy is an A-grade prick, just FYI. His name is Judge Rabbit. Elsewhere, Judge Rabbit, who is responsible for electing the honest-to-God GRIM REAPER for our island, fucks up and brings my real dad – who I didn’t know about – back from the dead to do the job. He gets help from my step-dad, who I thought was my real dad, and they go on an adventure to rescue me. But they’re both incredibly useless men and the crap they go through to get anywhere near me is straight-up bananas.

So, yeah. That’s my most recent adventure.

What did you first think when you woke up in that basement?

Honestly? I wasn’t shocked. I’ve blacked-out and woke up some pretty shady places before. The shit hit the fan when the hangover hit me and the man-beast guarding us wouldn’t let me go home. I saw that guy squash people like grapes.

When that happened, I was casually pissing my pants for about a year while I thought about ways to get out.

Ugh. I… Okay, when I thought I’d found a full-proof way out of that basement, I took the chance. I left the rest of my band behind when they were sleeping and tried to sneak out. Nearly made it, too… but I didn’t. So Judge Rabbit lined up and killed every other member of the band right in front of me.

It doesn’t get much worse than that. Other people getting killed for the shit I pull isn’t right. After that, I behaved myself for a while.

What is the worst thing about that year in the basement?

Apart from all the murder I just mentioned? Well, when Judge Rabbit replaced my band with some newbies, they were mostly boys. It’s not as bad as anybody dying, but boys smell. Boys are the worst.

Tell us a little about your Dads.

Dad number one, the guy I’ve always known as my dad, is a guy called Tom. He used to be a hot shot before life got on top of him and turned him drunk. And fat. And angry. He’s a nice guy, but he doesn’t reckon he got a fair shake in life. Shortly after my real mum and dad split up, Mum found out she was pregnant with me and Tom always kind of blamed me for bringing his life down. He would a hundred percent never admit it, but he did.

My other dad, my birth-dad, lost his name when he died. He got brought back as The Reaper for Wilson’s Well, so I took to calling him Grim. He’s a wet-wipe of a guy. Honestly. The idea that I got any of my genes from him is baffling. I’ve seen cardboard with more backbone. How anybody ever got him mixed up with a genuine candidate for the FERRY TO THE GOD DAMN AFTERLIFE is beyond me. For fuck’s sake.

I wish. The singer in my band is a straight-up fox and I’d die if I ever even found out what colour her underwear was.

Who do you hate?

Judge Rabbit. He’s, and I can’t understate this, a complete lunatic. He lives in a mansion where one of the rooms is just full of couches. There’s a room called THE SNAKE ROOM that he lost a snake in once. He tried to build a library to contain every book ever written. He’s not a sane or stable guy, and he somehow stumbled into a position of vast wealth and power and developed a nasty bloodlust to go along with it. He arranged a whole “Gala” to kill a lot of people in one place. He’s got a staff of nasty people under him, like a hapless goblin-man called Derek and that monster who watches us in the basement.

He’s terrifying. I’ve never known someone to have so much fun being so dangerous. He sets fire to everything he touches, including – but not limited to – the lives of me, Grim, Tom and even his most faithful sidekick, Derek.

I’ll drink anything, but purple cider is my main go-to. I love the colour black, and to anybody that says that’s not a colour, fuck you, man. Really. Say it to my face. Relaxing pastime? Uh, drinking purple cider, dressed in black, behind a drumkit, with a band surrounding me that know their shit, and a singer who would love to tell me what colour underwear she was wearing.

I have no idea. The future might stretch on for a while, too. I think, as soon as I can, I’m getting out of Wilson’s Well. It was miserable enough before I got kidnapped, now the island is genuinely quite stressful. I’m getting out and going as far away as possible. However, I’ve got a new sister on the way. If she’s as adorable as I expect her to be, she might glue me to the Well for a bit. This kid will need a role model.

There’s a part of Tom’s story, just before he went out looking for me, where he crapped his pants in public. This incident is completely moritfiying, but uh… I mean, I know we’re not blood-related, but one time my morning cigarette and last night’s dinner kicked in at the same time, and I had to get off a train, and it was in a beautiful area where there was – for some reason – not a single shop or a pub or anything that would have something to crap in, and I… found a space between a couple of cars and…

I quite like craft beer, too. That’s a secret I’ve never told anyone. Can I take the last one back? No?

Gavin is a twenty-nine-year-old writer living in Glasgow Scotland. He loves comics, pizza, cider and toys he just cannot afford. His debut contemporary fantasy/comedy novel, Grim, was released on the 14th of July 2017, attaining several five-star reviews since. He is fiercely left-handed and can grow a beard with the best of them.

You can find Cora on the pages of Grim.

Join us next week to meet a young woman who grew up on the fringes of Atlantis empire. Please follow the site by email (bottom-right) to be notified when the next interview is posted.