Matthew Wansford (of The Order of the White Boar, by Alex Marchant) 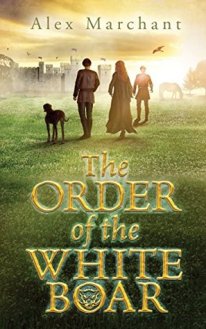 Dear readers, tonight with me is boy of twelve years, a merchant’s son who always dreamt of being a knight. His chance came in the summer of 1482, when he joined Richard, Duke of Gloucester – the future King Richard III.

He’s here to tell us about his life at court and the deadly games of the Wars of the Roses.

I was born, and lived all my life until last summer, in my father’s house on Stonegate, one of the finest streets of my home town of York. My father may not be one of the wealthiest merchants in the city, but to me, it’s a beautiful house. It even has glass-paned casements that you can open in some of the front windows. If you open the one in our second-floor jetty (where I used to share a room with my brother Peter) and lean out as far as possible, you can just see the topmost tips of the towers of our great Minster – the cathedral of our city. Its bells you can hear resounding through the whole house at all hours of the day and night. Perhaps it seems strange, but that’s one of the things I miss most about being away. That and my family, of course, and my friends from the Minster song school.

My most precious memories are of my mother – caring for my sister, brothers and me before… before she died. She was always a loving mother, even when our father was stern and seemed unyielding. When we did anything wrong, she would always talk him round so he was less harsh with his punishment. I think he welcomed that. He is quick to anger – and often regretted his swift actions. She would allow him a way out. His grief at her death after the birth of our little sister was painful to witness.

Since my disgrace last summer, and my expulsion from the choir school, I have been honoured to serve as a page in the household of His Grace, Duke Richard of Gloucester, brother to our sovereign King Edward IV, at Middleham Castle in Wensleydale. As my father says, I have fallen on my feet. Undeservedly perhaps, given the shame I brought upon my family – and I never thought to have such luck.

I have always dreamed of becoming a knight – ever since I first could read the courtly romances and tales of chivalry in the books my father imports from the Low Countries and France. But I thought it would only ever be a dream – that I would live out my days as a clerk in my father’s business, or at best become a cantor at the Minster like my brother John. Yet now I am on the first step to becoming a knight and warrior like my esteemed master.

Where to begin? There have been so many since my arrival at the castle. Perhaps the boar hunt that nearly went so badly wrong. Or maybe travelling all the way to London for the first time with Duke Richard. Even my father has only visited that marvellous city once in his life – and I not only travelled in the entourage of a royal Duke, but went with him to stay with his brother King Edward at his court in Westminster, and stayed for the whole Christmas season! And to cap it all, I rode out with the Duke, the King and his son, the Prince of Wales, on Twelfth Night. And the King and Princess Elizabeth thanked me most cordially for what I did on the boar hunt.

What did you first think when you arrived at the castle?

In truth, it did not seem like my dream of chivalric adventure. The training was hard – I had no talent for swordplay and could not ride as well as my fellows. And of course, I knew no one at first. All the other pages had entered service at the age of seven, as usual – they were worlds ahead of me in the knightly arts. Yet when Hugh Soulsby began to bully me, and Roger de Kynton then befriended me, I found I had other talents that could be of use. My skill with languages, for instance, and with figures, and I could shoot a bow as well as any after my training at the York city butts. And of course my singing was valued by the Duke and his wife. Hugh would say these are not the pursuits of a gentleman, but my father is a gentleman, just as good as Hugh and his family. Well, almost.

After my mother’s death, I did not think I would ever again feel such fear as I felt during her illness at the thought of losing her, but I was wrong. There are different kinds of fear, of course. The day Hugh persuaded the undergroom to mount me on a young, barely broken colt that belonged to the Duke – and then made the horse bolt with me aboard… But worse perhaps was the boar hunt. I can hardly bear to think about what almost happened to little Edward in the snow.

What is the worst thing about life in the castle?

Perhaps I shouldn’t say it, but it has to be Hugh. Without him (and being so poor at weapons training), my life at Middleham would have few clouds. I have hopes that when he ascends to the dizzy heights of being a squire, life may improve – we pages may be too far beneath him to bother about.

My friends! When I was banished from the song school and told I could never see my friends there again, I despaired. But then I met Roger, and through him Alys, Elen and Ed. I never thought I would be friends with the son of one of the King’s knights, or a ward of the Queen – let alone the son of Duke Richard himself. But here we are – and we have even formed our own secret order of chivalry – the Order of the White Boar, named after the Duke’s symbol. (That was my idea!) We’ve sworn to always be loyal to each other and to our good lord, Duke Richard – and to protect the weak and those less fortunate than us, as he would. I’m sure I will ever hold true to my oath – and to my friends.

Romantic? I love reading chivalrous romances – in French or even Italian now that Doctor Frees is teaching me that language. Is that what you mean? Though copying some flowery verses from one – from a knight to his lady fair – into a letter to Alys landed me in hot water after our return from court. How anyone could have thought I meant those declarations of love to be from me I have no idea. But Hugh ever seeks to make trouble for me – and his uncle clearly thought I posed some threat to Alys’s betrothal to his son. Though what a terrible thing that is – that she, aged only twelve, should be betrothed to marry Ralph Soulsby, a man of eighteen or nineteen! It is no wonder she detests hearing his name.

I should not admit this, but my master has a very fine wine in his personal store – meant only for his family and most important guests. But Ed knows where he stows his keys when he is from home, and pilfered some to toast our oath of loyalty. It was a taste to remember. Colour? Murrey of course! The dark red of my master’s livery – and of my hound pup. That is how she gained her name – Murrey. She’s the most important thing in my life, with my family, friends and master.

With the trouble Hugh has caused, it is difficult to foresee where my life will go next, and also with the dread news that my master received that same day: of the death of his brother the King, and the ascent to the throne of his son Edward, Prince of Wales – a boy younger even than me. In a kingdom racked so recently by civil war, so young a king will not have an easy time of it. How fortunate he is that my master, His Grace Duke Richard, has been appointed Protector of the kingdom until he comes of age. I will follow my master as long as he allows me to and serve him faithfully.

A secret? I blush to say it, but it may perhaps ease my sore conscience to confess it to you, stranger that you are… and if you swear never to tell. For all my oath of allegiance, my steadfast determination always to serve my master the Duke with utmost loyalty, there comes a day, a day full of woe, treachery and destruction, when… there is no other way to say it – a day when I betray him. To my utter shame and desolation, I betray my master. Never will I forgive myself for my actions on that day. Though I should never have confessed it… in truth, though, that is the type of boy you have before you.

Born and raised in the rolling Surrey downs, and following stints as an archaeologist and in publishing in London and Gloucester, Alex now lives surrounded by moors in King Richard III’s northern heartland, working as a freelance copyeditor, proofreader and, more recently, independent author of books for children aged 10+.

As a Ricardian since his teens, the announcement of the discovery of King Richard’s grave in a car park in Leicester in 2013 prompted him to write a novel about the real Richard III for older children (there being no such book available), and so The Order of the White Boar (with its upcoming sequel The King’s Man) was born.

You can find Matthew on the pages of The Order of the White Boar and the soon-to-be-released The King’s Man.

Join us next week to meet a captain of the shadowy Blackwings. Please follow the site by email (bottom-right) to be notified when the next interview is posted.

3 thoughts on “Matthew Wansford (of The Order of the White Boar, by Alex Marchant)”