Tobias (of The Court of Broken Knives, by Anna Smith Spark) 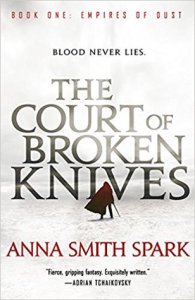 Dear readers, tonight with me is a foul-mouthed cynical mercenary. He was hired to lead his rag tag troop to the capital city, infiltrate the Palace, and take down the decadent and indifferent Emperor.

He is here to tell us about the Yellow Empire, about ordinary soldiers and gritty heroes, epic battles and blood-soaked revenge.

I grew up in village in Immish. Immish is rich country. My village is piss-poor. I lived with my mum and my grandma, and if you ask about my dad I’ll lamp you one. My mum and my gran were weavers. Gods, the cloth they could make you. Silk and cotton. Patterns in the weave: flowers, faces, luck charms all woven in. And I was a damn good weaver myself. Lovely bit of cloth, I could make you. Top notch.

Then Garet the dyer died, and his dyeing secrets died with him. And that’s a pun that never gets stale, even after I’ve nicked it off someone else. And now the village is poor as piss.

Lovely country, though, Immish.  Black soil, rich bloody soil, there’s bits of southern Immish where you can get in three harvests a year. Fruit and veg like you wouldn’t believe.  Borders on the Bitter Sea, and nice beaches, even, some of them, if you like that sort of thing. White sand and all that.  The city of Alborn: now that’s a place worth seeing.  All made of white marble, the city walls are white marble and silver, the Great Gate is white marble and gold.  Flashy? Hells, yeah. New money, all of it, and its bigwigs feel kind of insecure. So it’s not exactly what you’d call refined. And the back streets stink of bloody sewage, like anywhere, and half the kids have got worms and lice  and rickets and gods know bloody what. Price of progress, as they say. But it’s a place worth seeing, if you ignore all that.

May we just only visit the nice bits?

The rest of Irlast, the wider world …  Well, now.  I’m well-travelled (perk of the job), I’ve seen quite a lot of it, mostly when it’s on fire and drowning in blood, admittedly, but hey. Different building styles still look different when they’re on fire. Desert and forest and corn-land look …  actually, you know, desert and forest and corn-land look bloody identical once they’ve been burned and trampled and soaked in the blood of innocents, and I can’t pretend otherwise. We walk through the unburned bits, though, to get to them to burn them, and they’re all pretty enough in their way.

And your family? Your childhood?

So, yeah, I was a weaver, like my mum and my gran before me, and no I’m still not going to talk about my dad and if you ask again I will seriously lamp you. Until the dyer died, and his son had gone off to be a soldier in Alborn, and the village died with the dyer. (Still funny, see?) So I went off to be a soldier too.

See the world! Make some money! Impress the girls! Be a real man!

I’m a squad captain in The Free Company of the Sword. Which I know and my lads know is a shite name.  I work for a bloke called Skie, who inherited the company after the last bloke leading it died sudden.  Cost Skie his left hand, that, but worth it to get his own company. He says.

Standard hire is for the squad to go in, kill a bunch of guys, disappear out. Siege work we’re bloody good at, if I say so myself.  Holding the gates for one side and then opening them for the other, like we did at Telea. The Company’s finest hour, that; also we got paid twice.

But mostly it’s dull stuff, brute work guarding caravans, guarding fortresses, marching around looking tough.  We had this great job in the Neir Forest that was literally just killing defenseless peasants who happened to be living defenselessly where our employer wanted his new fortress to be.  Maybe not something you want to tell your mum about over dinner, granted, but the level of risk to reward was sweet.

We’re on a job heading off into the desert. The Sekemleth Empire of the Asekemlene Emperor of the Eternal City of Sorlost the Golden, unchanged, unchanging, the richest city in the world, the richest city in the richest empire the world has ever known. Its streets are paved with gold and its houses have roofs of jade and diamonds. Its air smells of spices. Even in the dark of midnight, in every house a thousand wax candles burn.  Ah, Sorlost, bride of cities! Jewel of cities!  Like a bird singing, like a flower blooming in the dry desert, like a kiss from a lover’s lips when one’s heart is empty with grief.

Or something. That’s poetry, yeah?  And note that that’s ‘richest’, not ‘most powerful’. The Yellow City and the Yellow Empire, they call Sorlost. That’s a clever and sophisticated pun on ‘yellow’ as in ‘golden’ and ‘yellow ‘as in ‘cowardly’, on the million to one chance you hadn’t already guessed.  Its streets are paved with gold and its people eat off gold and diamonds. And its standing army is two men and a donkey with mange. It has literally never fought a battle against anyone ever, on account of not needing to on account of being able to pay everyone ever off.

The job’s hush hush, so I can’t tell you much – but maybe don’t think about going there any time soon, if you know what I mean, hint hint. A good lot of money for killing some mostly harmless chaps. So Skie says:  ‘The Yellow Empire’s yellow, the Yellow Emperor at its head is thick as pig shit, the streets are paved with gold; we go in, kill some people, get out quick.’ And it’s an inside job, even.  Posh nobs killing each other. One of them will give us a bag of cash and the backdoor key.

What is the worst thing about travelling as a mercenary?

The smell in the tent of a morning. I share a tent with two of my men. After a week without washing, in hot weather, on the food we get …

There are a lot of things I could lie and tell you here are the best thing. Being my own man. Travelling. Freedom, and no ties. Waking up in the dawn, the sun’s rising over the meadow we’re camped in, the sky’s pale, looks almost like water, there’s mist rising from the river and dew gleaming on the grass, and the smell of woodsmoke, and a lark singing, spiraling up into the morning light … or frost in the winter, the world turned silver, shimmering, gods it looks like silk cloth, and the sun rises and there’s a hundred thousand rainbows scattered at your feet on the grass … or …

But you know what? I’m a sellsword. I kill people for money. So what do you think the best thing about my job is?

My friends … Gods. Do I have friends? I don’t have friends, I have men who work for me. Blokes in my squad.

Alxine – he and I go back a bit. Five years. Gods, no, wait, ten years, time bloody flies when you’re killing things. Notices things, does Alxine, good at scouting things out, kind hearted. Maybe too kind. The squad cook, gods only know why, I certainly don’t and I gave him the job. He’s foreign, from Ae-Beyond-the-Waters, which I sometimes thing isn’t a real place and he made it up. They worship giant squid over in Ae, not Alxine personally, obviously, but it explains a few things about him.

Emit – grumpy fucking bastard, asking for a thump round the jaw some days. Most days. Got this major talent in getting the hump about nothing and really pissing people off. Good with his sword, though. Hard bloke. Swears a lot.

Rate – the new boy. Clever. Strong. Talented. A natural leader, even, maybe, if he grows up a bit. Could probably do a lot better than the Free Company, to be honest, but don’t tell him or Skie I said that.

Actually, scrub that last bit. If he grows up a bit and learns a lot and manages to stay alive long enough, he could be a natural leader, even, maybe.

Marith –  the even newer boy. Way too pretty for this shit. Skie took him on and I have no idea why but I’m stuck with him.  Didn’t even have a bleeding sword when he arrived. Cries at night for his mum. Seriously, honestly, one night he wet himself.

The fact that Alxine still wants to get in Marith’s trousers even after Marith wet himself one night in Alxine’s tent is something I will never quite get over about either of them.

And that’s my squad.  Impressed, are you?  Cause I’m generally really not.

Apart from whoever my dad was, and the village dyer for dying, and half the population of Irlast for being alive and well and happier than me, you mean?

Crows. I fucking hate crows. Seen a lot of crows, being a mercenary, and their beady little eyes as they’re pecking someone’s face off really freaks me out.  Smug fuckers, crows.

Posh blokes. Don’t really need to explain that one, I hope. All the obvious reasons: I’m poor, they’re not.

Larrisa the brewer’s daughter from my village.  But that was a long time ago, and besides, I fucking hope the wench is dead.

I don’t want to know. I just don’t. If I knew what the future held right now, I’d slit my bloody wrists.

I know what the future holds, and it’s fucking horrible. Killing and blood and killing and death. I’ll end up enjoying it. Actually, scrub that, I already do enjoy it. Love it. Fucking love it. So just hate me now, if you want.

So, yeah, the future’s me trying not to think about the future, and trying not to slit my wrists, and hanging on and grinning like a loon killing a load of blokes until one of them kills me back. If I’m lucky, yeah, someone will kill me quick rather than slow. Good bright thought, that. Helps me sleep at night.

Tell me a secret.

I sometimes think I might fancy new boy Marith a bit myself.

Anna Smith Spark is the author of The Court of Broken Knives (HarperVoyager UK / Orbit US), the first volume in the epic fantasy series Empires of Dust. Her favourite authors are Mary Renault, R Scott Bakker, M. John Harrison. Previous jobs include English teacher, petty bureaucrat and fetish model. You may know her by the heels of her shoes.

You can find Tobias on the pages of The Court of Broken Knives.

Join us next week to meet a tiny sprite from a faraway fantasy world. Please follow the site by email (bottom-right) to be notified when the next interview is posted.

One thought on “Tobias (of The Court of Broken Knives, by Anna Smith Spark)”