Tom Islip (of Shadows of the Lost Child by Ellie Stevenson) 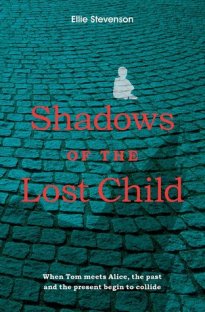 Dear readers, tonight with me is a boy from Victorian Curdizan, a fictional version of York, England.

He’s here to tell us about his life, and how it changed when he met Alice. Alice, you see, is from our own time – though she can visit the past, and interact with Tom and his mates.

Read on to find out about Tom’s life and time-crossing adventures.

Tell us a little about where you live. What’s it like?

Curdizan Low? Well, I like it, but I doubt you would. If I say, back street pubs, narrow lanes and open drains, you get the idea? Being just a lad, I’ve never known anything else, of course, but Louise, my mate, she told me once she couldn’t wait to get out of the place. But, then, she lives in Curdizan High, it might sound posh, but it’s definitely not  – she lives in a place called Pearson’s Tenements, five stories high. I once saw a woman jump from the top. She didn’t die, but she never walked the same after that. The rats in the High are the best thing about it. I didn’t even see Louise – she’s vanished from sight.

So what makes Haversham Road in the Low better?

It’s a house not a room, although our house does back onto the mill. That’s why it’s dark, there aren’t any windows at the back and not much light at the front either, the mill’s silo blocks it out. My da, Scotty, works at the mill, or that’s what he calls it, when he’s not drinking, and I go to school, they feed us there! The school’s not far from the tenements. When I can, I bunk off for a bit and visit my mate, Ben Tencell, he’s the man who makes the coffins and buries the dead. It’s a bit creepy in his workshop, with all those coffin lids on the walls. Even Norah, the horse is scared. Ben’s house has a secret tunnel, under the workshop, that leads to the church. That’s how we had our adventure…

Do you spend most of your time at school?

What? With my da? You’ve got to be joking. Da’s such a lousy provider, I’ve got a job in the local pub, The Keepsake Arms, washing glasses. Miranda Collenge, the landlady’s daughter, she’s my friend, although she’s older than me.  Miranda’s always me telling me off, but when she found an old trunk in her attic, with something in it – I can’t say what, I’m sworn to secrecy – she needed my help to get rid of the trunk. I’m keeping quiet – just for the moment.

Come on now, Tom. I’m sure you can say a bit more than that?

Oh, alright, twist my arm. To help Miranda get rid of the trunk, I had to enlist Ben Tencell’s help, and he’s just as bad as Miranda, bossing me around. I like Miranda, and she likes me, but I think that Ben likes her too, and he’s much older, more her age. I’m not sure he treats her right, though.

I’ve a lot going on, I’m also trying to find Louise, and it’s not just her who’s gone missing from the school, some lads have too, some of my mates. I owe it to Louise to find out why. And, then, there’s Alice…

No, wrong, Alice is scary, Alice isn’t like anybody else. I met her up in Curdizan High, right by the church and she looked so clean, all flowers and hair. Like butter wouldn’t melt in her mouth. She was holding this thing, it was big and square and flashed in the light, but when she saw me she put it away. She got it out again, later, to take a photo.

The thing is, I’ve heard about photos and someone I know had a portrait done, but that was for a special occasion. People like us can’t pay for portraits, even Miranda’s mother wouldn’t. The photo Alice took was amazing. I could see the gate, the back of my school, by the churchyard, and best of all, it was in colour. I was shocked. But that wasn’t the scariest thing, Alice took the photo of me, but I wasn’t in it! I’ve never run away so fast.

After that day, she kept turning up, saying weird things, like how my school would become a house and how our fields weren’t fields anymore. It freaked me out.

But, then one day Alice looked different, tired like us, and grubby and asked if I would walk her home. But when we went to walk down the alley, she told me to leave her there by the entrance, but I couldn’t do that, so I followed her down the path to the High, lurking in the shadows, and when I reached the end of the alley and peered out, the tenements were gone, my school looked different, and the church and Alice had vanished completely. I was stunned.

So what did you do?

I went back to my world. The thing about living in Curdizan Low is you have to deal with what you’ve got. Curdizan has its share of villains, not like my da who likes the pub, but real villains, like Wetherby Eisen who works at the school, and I suspect is some kind of crook. And Mister Pike, the schoolmaster – perhaps they’re why the kids have gone missing. They’ve plotted something. So I asked Alice.

And what did she say?

‘Where I come from,’ Alice said, ‘there are always stories about your school. Missing children, the School Lane ghosts. That’s what we call them. Everybody knows that, some believe it.’ Alice smiled. I didn’t like it when she smiled.

So what are you going to do next, Tom?

I’m going to help my friend Miranda get rid of the trunk, and solve the mystery – what happened to Louise. With or without Alice’s help. She’s a bit of a mystery herself, and I don’t think she’ll be vanishing soon. I might be meeting some others too, people who are out of my world – but that, I think, is another story…

A writing coach, Ellie Stevenson is also the author of three novels, all partly historical mysteries with a supernatural twist. Her most recent novel is The Floozy in the Park, set on a beautiful but sinister island, and in an Edwardian retail empire. Think Mr Selfridge with a dark side!

As well as the novels, Ellie has also written a collection of surreal short stories: Watching Charlotte Bronte Die and a booklet on Writing for Magazines in the UK. She is currently researching her fourth novel, fuelled by inspiration, determination and coffee.

You can find Tom on the pages of Shadows of the Lost Child.

Join us next week to meet an antagonist in an old feud – though he swears it’s his goal to save humanity. Please follow the site by email (bottom-right) to be notified when the next interview is posted.