Angelica Cross (of The Paranormal Detectives Series by Lily Luchesi) 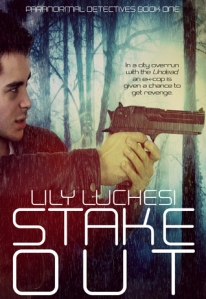 Dear readers, tonight with me on the interview couch is an unusual woman. A half-vampire, she is employed by law enforcement agencies to hunt down other creatures of the night.

She is here to tell us about

I was born in Leicester, England in 1814. I grew up the daughter of a human Lord, Vincent, and a vampiric Lady, Veronica. My childhood was spent learning how to control my appetite as a half-vampire and learn to be  a ”proper” lady like my mother after me.

In the late 19th century I moved to Chicago Illinois and have remained there all this time. I love the city, and it feels more like home than England ever did.

For the first twenty years of my life, I lived relatively normally. Half-vampires can go out in sunlight, so few suspected what I was and I was able to deal normally with humans. I lost my fiance at eighteen, a werewolf who had become possessed by a demon.

As a small girl I preferred books to toys, and I suppose I still do, if you count blessed serrated blades and Glock 9mm guns as “toys”.

My parents were wonderful people, people I tried hard to emulate and make proud of me. Mother was a true Victorian Lady, and Father was a businessman and former vampire hunter before he met Mother. It wasn’t until Mother turned him that things went sour: he killed her right in front of me.

My father’s actions, killing my mother, were what inspired me to take action. Before then, he and I had hunted evil creatures who were killing humans. After he changed, I took it one step further and came to Chicago to start the Paranormal Investigative Division of the FBI. We have HQs all over the world, but Chicago is our main base.

I was the director for a time, and will be again, but I prefer fieldwork. I love the feeling of a blade slicing through flesh, hearing the pleas of the damned before I rid the world of their miserable existence.

Well, I finally located my father [in Stake-Out, book one], as he was attacking Chicago Police Detective Danny Mancini. Since Danny and I became…connected, we’ve done quite a lot. We fought off an undead ex-girlfriend of his, along with a demonic witch cursed with immortality, the Lieutenant of Hell, and an immortal even more powerful than myself.

We face life or death challenges every single day, as well as drive each other mental, but I love him, and he loves me, and that’s what gets us through all the bullshit.

What did you first think when you knew your father was back in town?

When I first heard Vincent was back in Chicago, I dared not believe it. I’d lost him so many times, and to have him once again within my reach was exhilarating.

Finding Danny…well, I can’t really talk about that without giving too much away. All I can say is he despised me for being what I am. When things escalated with my father, as the murders kept piling up, all I could do was what I do best: hunt and kill the monster. Everything else could come later.

Scariest? I am a half-vampire hunting down paranormal creatures who break the law and harm humans. My whole job is one big fright fest! I guess if I had to pick, it would be timing. Timing was everything against Vincent, and if I missed a second, everything would be shot to Hell.

What is the worst thing about being a half vampire?

Feeling like I don’t belong. Humans, well, most humans, are terrified of me, thinking I’m going to eat them. And vampires scoff at me because I can’t utilize all of my Undead powers like turning into a bat. But the thought of turning is nerve-wracking.

Being able to live as a human for the most part while having extra speed, strength, and agility. It really helps when you’re chasing down a werewolf in the middle of a Chicago street!

My friends don’t usually have a very long shelf life. We’ve got Director Dominic, who runs the PID while I hunt. Bart, my head of security; he’s a werewolf but one of the good guys. Danny Mancini, of course, but more on him below.
Brighton Sands is a brilliant hunter from England; he and his fiance Mark Evans are a huge help to me. Brighton is almost like a brother.
Harriet Galbraith is the former Coven Mistress from the United Kingdom, and I’ve known her since the end of the 19th century.
Last, we have Sean Wireman, a male siren and rockstar whom I’ve been known to have an occasional dalliance with in the past.

Danny Mancini. *sighs* He infuriates me, frustrates me, and drives me more batty than I already am. He and I met when my father was trying to eat him, and well, it’s kind of hard to keep us apart. Even when he hates me and I want to kill him.

Fiona fucking Guilfoyle. Even worse than my father, Fiona is a witch who is also a demon…and immortal. She killed my husband back in the early 1900s, and now she’s back to take Danny from me. So while I’m dealing with Vincent, I also have to deal with her. It’s not the romantic thing, it’s the fact that she wants to eradicate all vampires from the world and have total control. She’s like a bad comic book villain. I can’t wait to tear her apart limb from limb for even thinking she can get the best of me.

Aside from blood? *laughs* I love whiskey and Coke, my favorite color is black, and I have a few hobbies. I love music and going to concerts, and I also am a collector of various things like Funko Pop Vinyls, Harry Potter wands (I have them all but Sirius Black’s), and I love to read. My apartment is pretty much wall-to-wall books.

The future? Well, lately [at the end of Last Rites, book five] I have a new job to do, something extremely important and time consuming. I’m not sure where it will take me, but I do know it will be a wonderful adventure with just enough danger to keep it interesting.

Well, I’ve been suicidal. I know, some secret. I went through a lot as a young woman (dad murdered mom, remember), and again recently [in book four] I went through literal Hell. After coming back I was very ill, with depression and PTSD. Let’s just say I have a new vendetta against demons and I will explore it one day, going back to Hell on a killing spree, maybe. Right now, I have too much on my plate to think about it.

Lily Luchesi is the award-winning author of the bestselling Paranormal Detectives Series, published by Vamptasy Publishing. She also has short stories included in multiple bestselling anthologies, and a successful dark erotica retelling of Dracula.

She was born in Chicago, Illinois, and now resides in Los Angeles, California. Ever since she was a toddler her mother noticed her tendency for being interested in all things “dark”. At two she became infatuated with vampires and ghosts, and that infatuation turned into a lifestyle. She is also an out member of the LGBT+ community. When she’s not writing, she’s going to rock concerts, getting tattooed, watching the CW, or reading manga. And drinking copious amounts of coffee.

You can meet Angelica Cross on the pages of The Paranormal Detectives Series.

Join us next week to meet a master technician, the first from the Diaspora worlds to win a coveted Master-tech position with Military R&D. Please follow the site by email (bottom-right), via Twitter, or like our Facebook page to be notified when the next interview is posted.