Duncan Greyson (of The Arena by Santana Young) 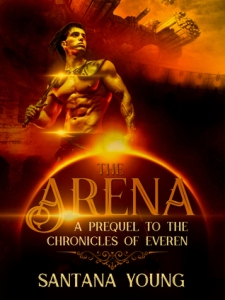 Dear readers, tonight with me is a space-age gladiator. An accidental fighter, he was thrown into the arena when his father sold him into slavery.

He was trained to kill by the worst humankind has to offer. He was promised freedom but only if he can claw his way out from ever-mounting debt.

When a secret his mother took to her grave came to light, he became determined to leave Neo Roma.

I spent the first eight years on a quiet farming colony called Janus Colony. Then the aliens called The Source attacked the colony. My mom died saving me and my little sister and I moved with my dad to another farming colony called Gaia Colony. People there liked to keep to themselves. I just tried to stay out from under my dad’s feet since he blamed me for mom’s death.

It didn’t work so well. He ended up selling me. Now I’m doing the rest of my growing up as a gladiatorial slave on Neo Roma where they like to remake whatever parts of Rome is convenient for them.

Do you have any cherished childhood memories?

My mom liked to tell me bedtime stories as a kid in her native Everen tongue. (I’m half human and half Everen, which is kinda like a genetically modified human.) She’d tell me about her homeworld she moved away from just before she met my dad. I liked to envision the horse farm she described or the heroes who helped bring the world out of medievalism and into the stars. Those are my favorite memories. Sometimes they’re all that keep me sane.

What is expected of you as a gladiator?

I train every single day in the practice yard. My best friend, Mahmud (we call him Mom) has taught me how to be a Dimachaerus, or a gladiator that uses two curved swords called Sica. I don’t get a lot of armor but I’m really mobile, which is good since I’m ambidextrous and have higher stamina as a half-Everen. The crowd expects me to pin my opponent so they have a chance to vote from their seats whether I spare or kill but sometimes that’s not always possible. Being a gladiator is half fighting well and half pleasing the crowd.

I spend a lot of this story struggling to survive, growing up fast, and learning a lot of hard lessons from the scummiest people in the galaxy. But I’m not staying here. I have to earn back the price of my purchase and any medical and food expenses to get free, but I’ll get there… I hope.

What did you first think when you started training to be a gladiator?

Overwhelmed and terrified. I was ten and didn’t know what I was doing. Nobody was there to teach me. I fumbled around for a while until Mom had pity on me.

Waking up on Neo Roma was pretty traumatizing. They knocked me out so I didn’t know where I was at first. My first match was scary, too. This guy was a mountain, a crowd favorite, and I was twelve the first time I went into the arena!

What is the worst thing about being a gladiator?

Some might say living in a cage or the possibility of death in the arena. I’d say it’s the loss of self, belonging to others, and the constant lie of hope that we tell ourselves.

My friends are a big plus. I mean, Mom is better to me than my dad ever was. Also, the big bath we have. It’s like a heated swimming pool that we get to relax in for an hour every day after the training yard. Man does that hot water feel amazing on sore muscles!

Mahmud “Mom” Kartal is my best friend, teacher, and pretty much big brother. He’s great at math and giving advice, though he can be a bit too protective of me at times. He’s been there the longest and is the best fighter in my school. Even though he’s great at listening, he’s not as good at sharing and doesn’t like to talk about home. Of course, he’s been managing to stay alive on Neo Roma for about twenty years. That’s a long time to stay a gladiator.

As to the other guys I’m friends with at Rossi School, Tom is the clown of the bunch. Undecim is also a cool guy who won’t tell us his real name and is a heavy-hitter in the fighting. Hans is quiet at times but is an open book if you talk to him.

Uh. Yuck. No. I mean, I’m ten when I first arrive to Neo Roma and by the time I’m fifteen, I’ve got my mind focused on other things than romance. Like surviving.

I hate people like my master, Cyril “Pitbull” Rossi, who makes money off of people. It takes away everything that we are. I hate the people that capture or buy people to come here. Then there’s the people who pay to watch the shows, rich folks born with the silver spoon up their butts or Spooners as we call them. Sponsors are as diabolical as the slave owners, and we don’t talk about them. There’s so many people here to hate, it’s sometimes hard to remember there’s still good out there in the galaxy.

I’m not really sure what my drink of choice is. I had wine once. It was pretty good until I had the after effects. My favorite color is sapphire blue, the same color as my eyes. Relaxing pastime? Well, before I came to Neo Roma I used to like to climb trees and read books about star ships. At Neo Roma, I like hanging out in the bath smoking my hookah I managed to con a rich person out of or throwing weapons in the practice yard.

Well, if I can get out of here, I’ve always dreamed of becoming a ship captain. If I had my own ship, I’d love to hunt down the jerks who put people like us here. Maybe, if I could take my friends, it’d be cool to find the guys that got them here and get justice. But those are some pretty big ‘if’s. I gotta survive this place first and foremost. Otherwise, there is no future.

I’m scared of people who aren’t inside my circle of friends. I don’t know who to trust anymore. I know I can trust Mom and the other slaves. We all know the same hell. But anyone else outside my circle, they can lie, they can be a threat. I want to be free but the truth is, freedom scares me, too.

Santana young grew up watching science fiction and fantasy, her favorite being Babylon 5. She began writing at a young age for fun. Santana currently lives in Southeast Ohio where she studies and recreates medieval history (Particularly, 13th-14th Century Mongol) as a member of the Society for Creative Anachronism (S.C.A.). She also enjoys painting, drawing, music, and playing games with friends. Santana holds a B.A. in Anthropology with research interests in archaeology, cultural anthropology, and early forms of humans.

You can find Duncan on the pages of The Arena.

Join us next week to meet a a globe-trotting journalist making the journey back to her childhood town, a place she has been running away from all her life.. Please follow the site by email (bottom-right), via Twitter, or like our Facebook page to be notified when the next interview is posted.