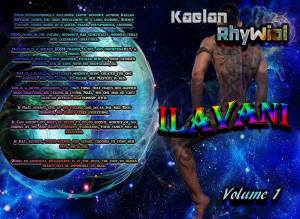 Dear readers, tonight with me on the guest couch is a member of the ruling family of Erieria, on the colony planet Ilavani.

He’s here to tell us about his struggles for self fulfilment.

Your name is Tourmaëline – did I pronounce it correctly?

It’s Mal, name looks funny when you spell it in English, but it’s still a derivative of Malcolm, my Companion name is Tourmaline, we take our Companion names after the house we trained in.

We know from your publicity packet that you’re a Prince? A Righ’sa, right? But what does that actually mean on your planet?

What do you think it means? It means loss of everything I ever wanted for myself. I have to give up my calling as a companion to serve the Righ’sea, the monarchy, by doing something I don’t want to do.

What does a companion do?

Anything we’re paid for that doesn’t violate our code of ethics. Sometimes we’re paid to go to dinner with people, sometimes to sing, or talk about art, sometimes to have sex with someone. That writer, Joss Whedon? He came close to what a Companion does on Ilavani in that show he wrote… Firefly.

Your role is more complicated than that, though, isn’t it?

Mine is, I’m the Guild head of the IGC-Interplanetary Guild of Companions. I chair the board that makes our laws. It’s going to be really hard to give all that up.

Why do you have to give it all up?

You’d need a history book of my family to truly understand it, but basically, we’re a very infertile species. The colonists messed with our genetics, modifying us. It gave us extended lifespans among other gifts, but it also reduced how many children we have. My father only had thirteen of us, and over the course of around fifty of your years, all but two of us, my brother Cam and me, were killed or they disappeared. It’s now up to my brother and I to rule the monarchy, including arranged pairings for offspring because our dad is dying. The Ard Righ knows about his illness.

That damned thing. Yeah, it translates to high king in English, but it’s a computer, an artificial intelligence tasked with improving humanity through breeding, genetic experimentation and also with protecting the planet. The colonists didn’t want what happened to earth to happen there.

You mean how the colonists were forced to colonize space just to live?

Are you leaving anyone special behind when you go into your new role?

How do you mean special? No, I’ve never been in a relationship like that. I’ll miss Los, for certain, but we both have our own lives. It’ll mess my brother’s head up pretty bad though, with the way he feels about Li.

Los, he’s a former student of mine. He became a full companion and has a thriving practice, but he and I have been lovers for a long time. Just not… in love, kind of lovers.

Li is my brother’s life-mate and my lover. We’re in a polyamorous vee relationship.

Is it? Ethical polyamory is the norm on Ilavani. I think I remember reading somewhere that it isn’t on Earth.

Indeed. Any final words for our readers?

You might be interested in taking ship for Ilavani at some point, we still have blue skies there, and green grass. Twins know we could use more colonists.

Thank you for being with us today, Mal.

Kaelan has had a varied career path that has led from bioanthropology/forensics chemistry crime scene analysis, to world history teacher to high level sales for the US government and now back to writing. Which started at the tender age of 11. Maybe shoulda just stuck with that one in the first place.

Join us next week to meet a hero out of the ancient world. He’ll tell us about all the gods and monsters he was hired to deal with. Please follow the site by email (bottom-right), via Twitter, or like our Facebook page to be notified when the next interview is posted.