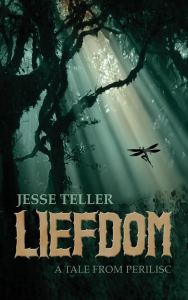 Dear readers, tonight with me is a creature out of fairy tales – but not those tales we reserve for children. A guardian of a peaceful city, tonight’s protagonist is a fairy like no other.

He is here to tell us about the dark troubles he faces in his society, his longing to belong, and about fighting to protect the human child bound to him.

Tell us a little about yourself and where you come from.

I am a protector, a guardian of the city I live in, and the boy that I was born to. Every time a Gentry fairy is born, a human child is born, a child protected by the Gentry. I protect my child zealously. He is my life, and he is in danger.

The city where I live is called Liefdom. There are many cities in the world of The Veil, but Liefdom is the capital city of all fairy life. We are surrounded by a forest, but all our structures are built into dryad trees. Every tree holding up every house is alive and vibrant, personal. My home is in a tree named Lyadora. She is a black chestnut tree and she strongly dislikes me. I don’t think she hates me; I don’t think she’s capable of hate. But she tells me all the time that I am a monster, that I don’t belong here. Maybe she’s right.

What’s your understanding of hate?

I’m a warrior, so I am intimately engaged with the emotion hate. When I look at a thing that needs to die, I am enveloped with the emotion. My blood heated by it. There are a few things, a few acts, that inspire deep hatred in me. They are all tied to my fate as a protector. The city I live in is often called the City of Innocence. If someone endangers that innocence, my soul boils. There is an adversary out there. I can feel him, as I’m sure he can feel me. His life offends me, though I know not why. He has harmed my child. He has risen to destroy everything. He is poised to take it all away from me, and I know not his name. And I know not his face. But when I near him, I will be able to feel him throbbing in my bones.

What can you tell us about your latest battle?

An invading horde of satyrs were coming, and the citizens were commanded by the king to flee Liefdom and allow the worst, the city’s sacking and destruction. But there were many creatures that couldn’t leave, couldn’t evacuate. I could not sit by idly. So I flew out to meet them. You could call it justice, defense. You could call it courage and steadfastness. You could call me a hero, and many did. But in the end, it was violence. It was bloody and it was ugly. And when you’ve seen something like that and done something like that, it’s hard to come back from.

I saw my child, the child I was born to protect. I looked down on him in his crib, and what I saw will never leave me. How a creature I love so much could be so horrifying to me, I’ll never understand. A lot has happened since, but I’ll never forget that sight. When it wakes me up at night, I’m forced to lay in the dark with it, trapped with the ghastly sight of the one I love.

Chil is the king of the raptors. We had a chance meeting and he saved my life. He took me in when I had nowhere to go, and I was only a wounded shell. He gave me a purpose, he gave me a job, let me earn my keep, ushered me into a brotherhood. I’m a friend to Chil as much as a subject can be a friend to a king. My loyalty to him is absolute, and my love for him is unwavering. He is a true north for me, a creature that understands me in a world in which I am foreign.

What did you first think when you met your cousin, the prince of The Veil?

Azure is a prince, and he knows it. When I first met him, I thought he was arrogant, which I guess he is. I thought he was coddled, that all his experience was second-hand, given to him by tutors and masters. I thought he was a vile little twerp, and I knew he hated me. I know him now; you can’t do what we’ve done and experience what we’ve experienced without getting to know each other. Some of those opinions I had of him are still strong. But when you really get to know somebody, he becomes more than a collection of traits, and that’s what Azure is to me.

What is the worst thing about living in The Veil?

I’m unique. I’m one of a kind, a warrior to a race that has never known battle. Radical pacifism surrounds me, and I can not understand it. I can’t make sense of it. When I see an adversary, my instinct is to fly out to meet it, which is an idea that is coarse and grating to everyone around me. I will always be alone here. All I can do is fight to understand them.

Every day I get to look at her.

So there’s a romantic interest?

Her name is Stylus Pea. She’s a member of the Stylus clan. They have one purpose that they are fanatic about. In the world of man, a caterpillar weaves a chrysalis for itself to transform into a butterfly. That chrysalis is a doorway into the world of The Veil. That caterpillar goes through many transformations as it enters our world. Some important, some trivial. But when a butterfly is in our world, before it goes back to its chrysalis doorway, it is translucent and colorless. So it comes to the Stylus family. It is their sacred duty to ink the wings of butterflies. I could watch her do that all night long. There’s a look to her eye when she’s working, a level of concentration, and a realizing of fate, that can only be described as rapture. I am watching her at her most beautiful. It is a sight that I live for.

Do you have any cherished possessions?

I was born of a mandrake flower, and my childhood was over by the time I fell to the ground. I came home to my city and was shunned by my people. I later went to live in the City of Raptors with the hunting birds. I was a warrior there, and I earned many trophies. They’re bittersweet. They were collected off of criminals I killed, members of other species that had not obeyed the hunting laws of The Veil. Each kill represents a hunt and a battle with creatures I call family. Each one also represents a death I’m responsible for. They are a constant reminder of my ability, and a constant reminder of my violent nature.

I was out one night with a few falcons and a crow. We were on the trail of what we were sure was a rabid wolf. We were taking a rest, sleeping for the night, and I looked up and saw the moon. I thought of her. I knew she was working under that same moon. I knew she would look up at it. More than anything, I knew that moon was in love with the world it circled, and that it could never be with it. The next day, Tretch was eating a freshwater clam, and he found and discarded a pearl from within. I thought of the moon and I took it for her. I didn’t know if she would appreciate it, or even want it, but I had to give it to her just in case.

I am going back. I’m going back to that city in the world of man. Something sinister lives within the bones of that city. A great evil is rising there, a dawning of something terrible in its devices. I sensed it when I was there, and I couldn’t fight it. But it is coming. One day, I will go back to fight it.

What else does the future hold for you?

Right now my future is uncertain. My race is a race of innocence. The moment we lose that innocence and our mind and soul is darkened or stained with evil or foul deeds, then we transform into something else, something vile and dangerous. I have killed. I can feel that creature looming over me. I can feel my body ripe for transformation. I can feel the coming of a great darkness within my soul, and I fear the evil budding within my heart.

Jesse Teller fell in love with fantasy when he was five years old and played his first game of Dungeons & Dragons. The game gave him the ability to create stories and characters from a young age. He started consuming fantasy in every form and, by nine, was obsessed with the genre. As a young adult, he knew he wanted to make his life about fantasy. From exploring the relationship between man and woman, to studying the qualities of a leader or a tyrant, Jesse Teller uses his stories and settings to study real-world themes and issues.

You can find Gentry Mandrake in the pages of Liefdom.

Join us next week to meet a man, a demon, straight out of hell. Please follow the site by email (bottom-right), via Twitter, or like our Facebook page to be notified when the next interview is posted.