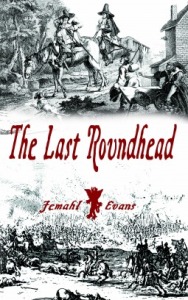 Dear readers, tonight with us is an irascible old drunk with a hatred of poets and a love of hats, straight out of the 17th century English Civil War.

He is here to tell us of his adventures, from battlefield to bedroom, unmasking Cavalier plots, earning the enmity of the King’s agents and uncovering an attempt to steal thousand.

I was born on the Ides of March 1624 – prophetic, no? My father was a rich cloth merchant who had an estate in Hilperton, near the town of Trowbridge in Wiltshire. Papa gave me the name Blandford after the town where he had just bought a new tannery. ’Twas not the best of starts perhaps, but then my father was ever a drunken old sot. He was likely too soused to think of a proper name.

My mother died when I was but a child from smallpox, and my eldest sister Elizabeth did her best to raise me, and my siblings. I had four: two brothers and two sisters, all dead now, of course. I was the fourth of five, with my little sister Anne the youngest – and most witless; truly she had less intellect than your average sheep. I am the last of the Hilperton Candys, excepting my idiot great nephew. He has just married; he is charmingly naïve.

I used to love to play with a whip and top that Mr Figgis carved for me, but my brother James took it, broke the whip over his knee, and threw the bobbin into the River Avon. I had my vengeance: I hid some dead gudgeon under his floorboards until the stink drove him out of his chambers. My eldest brother Henry was a hairy giant – more monkey than man – and another bully, but ’twas ever James that was most cruel. I remember little of my mother – soft white hands and a smile, nought else of worth. ’Tis a tragedy for a son not to remember his mother’s love. Do you see? I am not averse to playing for sympathy if it be to my benefit.

Now? I am ninety five years old, boy. I write my memoirs, dream up ways to annoy my neighbor, and call the servants to clean me when I piss myself. What do you think you will do at my age?

Cromwell; you will meet Cromwell. That should be enough to pique an interest. Oh, there are battles certainly: Newbury and Marston Moor, and a myriad of little skirmishes. There is a murder most foul to be solved, a vast hidden treasure to find. My uncle, Sir Samuel Luke, was Scoutmaster General of the Army under the Earl of Essex. He always had interesting tasks for me in the fight against Royal tyranny.

What did you first think when you were in a battle?

Terror, pure terror. Any man who says he felt no fear when he faced pike and shot is a damned liar.

What is the worst thing about the English Civil War?

Watching the zealots take control and drive a civilised nation into barbarity and civil war. Seeing how it is so easy, so simple, for man to kill his fellow man. There is nought good about it.

The rats in my prison cell in York. They were grown near as big as a cat off the flesh of prisoners. I would wake in the night and find them crawling over me, chewing at my ears.

I had many friends. I counted the great and the good, high and low, amongst my comrades. Closest to me in my youth was William Everard, famous now as the Digger leader, then he was just a shabby poacher. I was a poor friend to him.

I adore all women and do not save myself for one alone. ’Tis a petite misdemeanour in the grand scheme of things. Tall ones, short ones; fat ones, thin ones; big breasts and small titties – they are all beautiful. I have kissed pert lips and squeezed plump buttocks from every race and creed. ’Tis no empty boast to say that they adored me in return. There were some I cared for more than others; some that I loved, some who broke my heart. I do not begrudge them that. I probably deserved it.

The poet Davenant told me once that he thought the loss of my mother as a child was the cause. I was seeking my mother in the breasts of the women I chased. I told him he was damned insulting.

Sir John Hurry; Sir Foulbreath Turncoat. A Scots traitor, thief, and freebooter that has caused the death of friends and tried to have me killed thrice over. His breath stinks like a sewer on a summer’s day. If he is to shake your hand, check afterwards to make sure all your fingers are still there.

I like a Malaga wine. Thick and sweet as honey, full of fruit and heavy. ’Tis expensive nowadays with the Spanish war and smuggler’s extortionate prices.

Oh there are still many tales to tell. I have a king’s head to cut off, and a dear friend to betray. Then we have the Restoration, of course, I was involved in that too – much good that it did me: Dutch wars, Swedish queens, Turkish prisons. I knew the real D’Artagnan, did you know that? There are books about him as well I hear. The man was an effete fop who stank of garlic and seduced my sister. I quite liked him, even if he did try to kill me.

A secret shared is a secret no longer. Has none ever told you that, Assaph, my boy? Yet, I will tell you one thing: I care not for the parsnip. ’Tis an accursed foul tasting vegetable.

Jemahl was brought up in a West Wales mining village during the 70s and 80s. He has pursued a lifelong passion for History, inspired by his grandfather’s stories and legends. Jemahl was educated in Christ College Brecon, St Mary’s University College (Strawberry Hill), and U.W.E. Bristol.

Jemahl graduated with an MA in Medieval History, focusing on poetry and propaganda during the Wars of the Roses, and then worked for IBM in London. At the turn of the millennium, he left the grind of the office and spent a couple of years travelling and working abroad. After time spent in India, Australia, and South East Asia he returned to Britain and took up a teaching post in West London in 2005. He left his role as Head of Year in the Heathland School in 2010, and returned to Wales citing hiraeth.

The Last Roundhead was released in August 2015, and nominated by Netgalley as one of the UK’s top ten books being released that month. It received a great review in the Times, and the Historical Novel Society described it as ‘a rollicking good read!’ The second book in the series, called The Deceitful Light, will be published by Holland House Books in September 2017.

Join us next week for a viking woman, the rightful heir to the kingdom. Please follow the site by email (bottom-right), via Twitter, or like our Facebook page to be notified when the next interview is posted.