Dr. Skylar Santangelo (of Healing The Witch Of Adelaide Glen by J.C. Stockli) 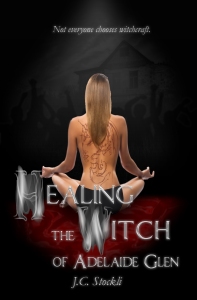 Dear readers, tonight with me is one of our leading legal prosecutors. As it turns out, his grudge against the paranormal and supernatural lies with some dark secrets in his past.

Tell us about where you grew up and studied. How did you get from slums to academia? What is your PhD about?

[chuckles] Mamma moved to the States when I was real young. I grew up in a housing project in the south end of the city. I never aspired to leave the hood. I liked it there. I was someone to be known there, but every smart-ass punk has it coming to him, I guess. I chose academia over incarceration. My boys from back on the day found their path on the straight and narrow and guided me along. I’d be dead without those guys, no doubt. In terms of my PhD, the only subjects that made sense were theology and demonology. I’m what you’d call a “subject matter expert.”

Tell us about those tats – what made you get them? Is there an overall design?

[turns head down with a furrowed brow] There’s a method to every man’s madness. Some of my ink is just the result of being a stupid punk. Others…? Yeah, they mean something… but we’re not getting into that here. Next question, man.

After your youthful brush with the law, what made you go into law enforcement?

[shrugs shoulders] Didn’t have much choice. My boy stuck his neck out for me, to give me a second chance. You don’t shit on that kind of loyalty, man. You fucking pay it back in blood.

Why are you so passionate about hunting and prosecuting Witches?

Craft is a dangerous thing in the wrong hands. I’ve been studying it for years, and there’s still so many unknowns. I do it to learn more, not because I like the persecution.

What can you tell us about the Institute of Paranormal Studies?

That’s what the Institute does, we work with law enforcement to learn more about the craft. Since witchcraft was outlawed, it’s the only way we can exist–partnered with the judicial system, I mean–and some pre-existing concepts of the legal process don’t translate well when discussing conjuring. That’s where the Institute can offer assisstance… when they let us.

What was the scariest run-in you had with paranormal creatures in your career?

Every incident is twisted in its own way. One time, this crafted-out motherfucker thought he was some badass devil worshipper and held a seance at a party down by the old railroad tracks. Fucking idiot was so drunk, he had no clue what he was mumbling and conjured a demon from the bonfire. That damn thing hissed venom, wore a thick fur of fire, and had one of this wild barbed tales you see in picture books. There’s a reason the Devil is depicted the way he is in fables. It wasn’t scary so much as a challenge. That bitch was strong and got some good hits in, but I sent him back into the bonfire, while my boy cuffed that drunk kid before he called and more of Lucifer’s friends out to play.

[laughs] You should have seen the faces of the cops when I got that beast under control. Fucking cops never know what to do. They just want to shoot and ask questions later when faced with the paranormal. It’s a knee-jerk reaction. Can’t blame them, I guess. A couple of partiers ended up in the hospital with third degree burns from the demon, and some pretty little cheerleaders had to rethink their futures once the wounds healed. It was sad, really. One drunk idiot could have unleashed Hell on the city that night. No one realizes how dangerous crafting can be if you have no clue what you’re doing.

What other beings are out there?

Shit, I don’t know. There’s too many legends floating around the world to know if all of them are true. I believe there must be some truth to all of them somewhere, though. I’ve dealt with demons, living corpses, possessions, devil-worshippers. The witches that upset me the most are the ones who practice innocent white craft. For them, conjuring is spiritual and benevolent… but it’s still conjuring, and that’s against the law nowadays.

What makes Neve so special to you?

[sighs] I purposely avoid the news and media when it comes to her case, but what I do know is that she’s the cleanest-cut kid our society could pump out. I don’t think she conjured with intent like everyone believes. I think she dabbled and some otherworldly demon heard her call for power. She’s the key, really. She didn’t mean to kill all those people, and doesnt deserve to burn for it. We, as a society, need to ask why she did what she did, so that we can learn from her. We should want to treat her condition, identify it in the future, and prevent it. She’s guilty by reason of possession, not insanity. I think she’s capable of rehabilitation. If I can prove witchcraft is treatable and curable, then we don’t have to kill every “witch” unless there’s just cause.

JC Stockli is inspired by music, the past, and possibilities. Happily Ever Afters are only achieved through the cost of some blood, guts, or a soul or two… if at all. Over the years she’s moonlighted as a magician’s assistant, a roadie for a heavy metal band, a dance fitness instructor. You can kind Skylar on the pages of Healing The Witch Of Adelaide Glen.

Next week we will be honoured to host the revolutionary president of a South American republic. Please follow the site by email (bottom-right), via Twitter or like our Facebook page to be notified when the next interview is posted.