Nash Xander Korpes (of The Korpes File by J.I. Rogers) 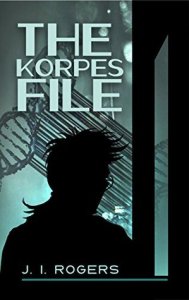 Dear readers, tonight with me is a master technician, formerly with the Korlune Military Research and Development. He is also the first from the diasporan population to win top prize at the prestigious Symposium.

As Nash’s time is limited, I’ve arranged to meet with him between appointments. He indicated that he is willing to answer questions about his early life and talk about some of  the difficulties he’s faced, career-wise, in a country ruled by xenophobic traditions.

Congratulations to you and your team on your recent Symposium win, Master-Tech Korpes. Do you have a moment to share with my readers?

Certainly, it would be my privilege, Assaph. I’m a big fan of your column.

How does it feel to be the first Diasporan entrant to have won this prestigious competition?

That’s not entirely accurate. My Master-Mech, Davis Trent, is also Diasporan but I think I can speak for both of us by saying it feels great.

Can you give my readers a little history about yourself? Where were you born, for instance?

Born? Just kidding. Yes, contrary to popular opinion I wasn’t hatched in a Rec-Gen lab; I had real parents, though I never met my father. He was killed in our last border skirmish with Ankoresh. My great-grandparents were among the first Tyran refugees settled in Diaspora Twelve after the final exodus. Locals referred to D-Twelve as Astel which means ‘hope’ in Tyr; my mother said it actually translated to ‘awful weather.’

By the time I was seven, my mother had become the Master-Mech in charge of the city’s reactor. She, my grandmother, my sister and I lived in a three-bedroom apartment that had been in our family since the settlement. The city was less than twenty kilometers from the coast, so we were constantly being hit by the storms that blew in from the Northern Hotari Sea; our dome maintenance crews deserved medals for their efforts.

Up until ten years ago, Astel had one of the top producing Tellium mines which employed over half the city’s population. Sadly, like most of our equipment, our air filtration systems were outdated and couldn’t handle the level of dust that was generated. The particulates that escaped created a perpetual amber-hued haze. You had to mask-up when they were swapping the filters out, or you’d run the risk of getting a lung infection. END_OF_DOCUMENT_TOKEN_TO_BE_REPLACED