Thrasius (of Feast of Sorrow, by Crystal King) 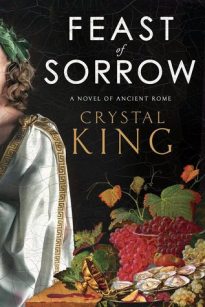 Dear readers, tonight with me is a man, working in a profession we do not normally come across. He’s a former slave, originally bought as a cook.

However, he found himself the cook of none other than the Roman empire’s most notorious gourmand, Apicius. As anyone who have met Felix and me know, we are forever indebted to that great man, for relentlessly documenting the ancient cuisine we all know and love.

Without further ado, let us have Thrasius tell us about his life.

My very early childhood was in Greece. I was a twin, born to a slave woman who died in childbirth and whose name I never knew. My sister and I were raised by another slave in a respected house in Pompeii until we were four. When that patrician died, the household slaves were willed to several different relatives and we were separated. I never knew what happened to her. I barely remember anything about her, except her name, Thecla. I was lucky and my master saw that I was smart and had me taught to read and write from a very young age. I think he thought I might eventually become a scribe.

One of the slaves in the household where I grew up carved some wooden animals for me. I played with them often and even back then I think my true colors as a cook were showing through. I often would pretend to capture and slaughter the animals, then take them home and roast them over the fire.

I am a freedman working in the household of Marcus Gavius Apicius, one of the wealthiest men in Rome. I began my time in his household as a cook but eventually have become one of his most trusted advisors. My duties are wide. I do have a secondo, what would you say—a sous chef? But I am generally responsible for every dish in the kitchen, overseeing all the banquets, for managing the extensive guest lists and advising my master who should be invited; and I also am in charge of the Apicius School of Cooking. END_OF_DOCUMENT_TOKEN_TO_BE_REPLACED