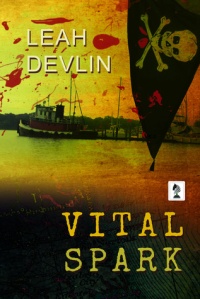 Dear readers, tonight with me is a young millennial homicide detective.

While it may seem that this small-town, hashtag-speaking, police offer is too young for it, she had the (mis-)fortune of dealing with some scary serial killers.

She is here to tell about what is now known as the Chesapeake Tugboat Murders.

Tell us little about where you grew up.  What was it like there?

The name’s Paco.  Sergeant Lisa Paco.  I’m a detective on the River Glen Police Department, the best PD in the best village in America.   Yeah, yeah, I know I look like a sixteen-year-old, but here, if you don’t believe me, check my police ID.  See, right there.  My DOB.  I’m almost thirty.  I was born and raised here in River Glen on the Chesapeake Bay … on the Maryland part of the bay, not the Virginia part.  So we don’t have those stinging sea nettles like the Virginians in the southern bay.  And if some joker tells you that Virginia blue crabs taste better than Maryland crabs, well, he’s just plain delusional.  Okay, back to River Glen.  We have a population 89.  We have a psychic, Cannabis farmers, burnouts from the 60s, moon-shiners, artists, crabbers, and fishermen … all the usual suspects.  Oh, we also have pyrates.  Yeah, yeah, you’re laughing like you don’t believe me.  But I promise, it’s true.  We have pyrates.  Really!  Real-life modern pyrates.  Yep, River Glen was founded by pyrates from the pyrate ship Raven.  Every summer we have the annual pyrate festival, Giles Blood-hand Day.  It commemorates Giles Hale’s slaughter of the deranged Whitby family who stole gold from the village treasury in 1694.  He’s a local hero for returning the treasure.  The festival’s wilder than a Jimmy Buffett- or Grateful Dead concert.  It’s crazier than Burning Man.

So here’s how we got pyrates.  In the late 1600s the Raven was hiding out in today’s Tampa Bay to avoid a hurricane.  After the storm, a Spanish treasure galleon appeared off the coast.  While the crippled galleon was mending her masts, the Raven attacked.  Guns blazing, the Raven’s crew killed the Spaniards, stole the treasure, and made a runner up the eastern seaboard, but not before abducting women prisoners working on a Virginia tobacco plantation.  The Raven slipped behind colonial defenses at the mouth of the Chesapeake and found a remote river to make repairs.  Her hull was rotten with shipworms; the planks crumbled to the touch.  The pyrates and their ladies were stranded on the upper Chesapeake.  So that’s the origins of the tiny village of River Glen.  But what … I ask you … happened to the Raven’s fathomless treasure?

Cherished memories … so many.  I have an amazing mother.  I still live with Wanda because she has MS.  We’re as bonded as a mother and daughter could ever be.  We watch murder mysteries together every night.  As a child Wanda took me to the town library to read any and every murder mystery ever written.  All I ever wanted was to be a cop, a homicide detective.  And that’s why I’m destined to be the River Glen Police Chief one day.  Maybe after that, I’ll be a crime consultant for cable news and get interviewed by Rachel Maddow or Christiane Amanpour.  How cool would that be?

What can you tell us about your latest case?

We’re working on an ubercool case.  The Cliff Top Serial Killer Case.  A glitzy yacht owned by this bimbo treasure hunter from South Beach went cruising down the Glen River and created this giant … bigger than giant … gargantuan wake that washed away the base of a cliff.  And next thing you know, Henry Herssen’s haunted cottage plummets over the edge.  Crash it goes into the river in about a gazillion pieces.  Sweet!   All these bones stick out of the cliff.  The CSI team, led by the genius Dr. Zera Lim, discovers skeleton after skeleton in a mass grave under Herssen’s floorboards.  Five skeletons!  Double sweet! … also found on Herssen’s property is a dead spider.  Atrax robustus, a funnel spider from Sydney, Australia.  Go figure.  A super venomous critter.  Woo hoo!  Finally something exciting to investigate after a deathly dull summer.  #pacohatesparkingmeterdutyonMainStreet.

What was the scariest thing you witnessed on the job?

Hands down … the massacre on Mutter Island between two rival pyrate families, Allaways and Whitbys.  I showed up on the police boat after it happened.  It was horrible.  I don’t want to go into the gory details – actually I do – but I don’t have time right now.  Remember?  #bonesunderfloorboards.  #clifftopserialkiller #poisonousfunnelspiders  And being the State of Maryland’s Goddess of Crime-solving, I’m going to solve the case before my colleagues.  Yeah, yeah, I get that it’s all about teamwork blah blah but I’m compulsive like that.  Besides, you can read about the Mutter Island Massacre in the novel Vital Spark by Leah Devlin.  Leah’s this mystery-writer who zooms down from Philly on her badass motorcycle to write thrilling crime novels about the pyrate families of River Glen.  Sometimes she interviews me, or my boss Senior Detective Jay Braden, and sometimes Dr. Zera Lim.  Then Leah motors off on her mini-tugboat to a secluded inlet, and bangs the River Glen crime stories into her laptop.  I think they’re called the Chesapeake Tugboat Murders, or some corny name like that.  But back to the massacre … a mysterious treasure map led the marine biologist Alex Allaway out to Mutter Island on that fateful day.  But the evil Whitbys laid in wait.  A brutal sea battle ensued.  Two homicides on the beach, and worst still, two sociopathic brothers are still missing!  They might be anywhere … lurking around River Glen.  #pacohasthewillies

What is the worst thing about your job on the River Glen PD?

The nagging.  “Get off your goddamn smartphone, Paco.  I don’t care how many Likes you have!” my boss Jay huffs. “Ugh, millennials.”  Or the nagging is about my gum-chewing.  “That gum-smacking bugs the shit out of me,” he says ad nauseam.   And Zera won’t let me stick my gum to the corner of her desk when we’re eating pastries.  “Spit it out, Lisa,” Zera says pointing to the trashcan.  “But it’s only five minutes old … there’s still tons of flavor!”  “Out Lisa.”  No one understands that my brilliant sleuthing mind is fueled by a massive wad of strawberry gum.

What is the best think about your job on the River Glen PD?

I have the best colleagues in the world.  My mentor Jay Braden is beyond cool.  He moved here from the Baltimore PD because his wife Laura is as mad as a hatter.  He thought that a quiet Chesapeake village would help to pacify her.  Whoa … was he mistaken?   When he’s hung-over (every morning), does he have a temper!  But it’s always directed at some scumbag, not me.  When said scumbag pisses Jay off, he transforms into this persona that I call Psycho Cop.  Jay grabs a pool cue or improvises with any handy object … it’s crazy violent like out of the movies.  If Jay were a movie character, he’d hang out with Clint Eastwood or Charles Bronson characters.  Not one of the pretty boys like in the movies today.  Ben Affleck … yeah right.

You can’t tell anyone this!  I mean it.  Promise?  Really … you gotta promise.  Do you promise?  You sure?  Okay then.   I have a very bad feeling that  …  I just can’t believe it! … my mother Wanda is the Cliff Top Serial Killer.  Twenty years ago, my parents had this knock-down-drag-out fight in our apartment.  My dad headed for the door with his gym bag and boxing gloves.  Wanda screamed, “If you come back here, you prick, I’ll kill you!  Count on it!”  And you know what?  I never saw him after that.  Until now.  In the morgue.  This afternoon.  You don’t believe me?  Here’s how I know.  Zera Lim told me that one bodies excavated from the mass grave at the cliff top had been in the ground for twenty years. paco@panicattack when I saw Victim Number 5.  The skull had the same Neandertal brow ridges, smashed up nose and zygomatic arches as my father Owen.  It’s gotta be him!  What do I do?  Protect my beloved mother?  Or turn her in?  Is the poisonous funnel spider from Sydney Australia hers?  OMG, what to do?

Leah Devlin’s passion is to weave historical mysteries into fast-paced, heart-thumping modern mystery-thrillers.  She’s the author of the Woods Hole Mysteries (The Bottom Dwellers, Aegir’s Curse, and The Bends) and the new Chesapeake Tugboat Murders (Vital Spark 2016, Spider coming 2017, Chrome Divas in progress).  Leah is a marine biologist by day, mystery writer by night, and adventurer 24-7.

You can find Lisa on the pages of Vital Spark.

Join us next week to meet the CEO of a real-estate empire, learning to find love. Please follow the site by email (bottom-right), via Twitter, or like our Facebook page to be notified when the next interview is posted.